Why are the young ‘uns all voting for Bernie? If you can avoid the condescension that typically poisons this topic, it’s actually an interesting question. It would hardly be worth asking if Bernie were outpolling Hillary by, say, 60-40 percent among millennials, but lately he seems to be outpolling her by about 85-15 percent. That’s crazy. Santa Claus would have a hard time pulling numbers like that against the Grinch.

So I’m going to noodle over this. WARNING: I’m not planning to come to any conclusions here. I’m just pondering possibilities sort of randomly and taking a look at whatever relevant data I can find. If you’re interested, come along for the ride.

First up, John Cole offers what I consider sort of the conventional wisdom. Millennials are attracted to Sanders because they’re pissed off about their grim economic prospects:

When we are talking about the youth vote, we’re talking about the people who have been straight up fucked by the current political establishment….They are saddled with debt, their economic opportunities are far more limited than that of any recent generation, and while they are working three jobs and paying for the SS benefits of current and soon to be retirees, they’re fed catfood commissions by “reasonable” Democrats and told they are being selfish by the Boomer generation — the generation that while achieving many great things, has left a fucking mess to deal with.

So what about that? Here’s median income and student debt among millennials since 2000: 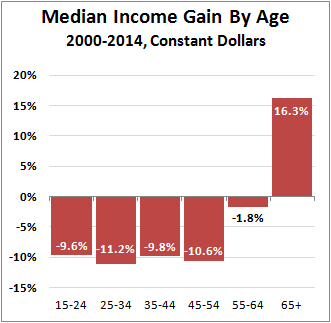 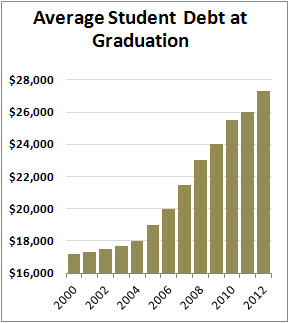 Millennial income has certainly gone down, but no more than any other group up to age 55. Relative to everyone else, there’s not really much to see there. On the debt front, there’s not much question that college students are being squeezed harder every year. Still, since 2000 student debt has only gone up about $10,000—and that includes all the folks who have racked up $100,000 bills to go to law school or business school. For most undergrads, it’s less than that. As for the cat food commissions, even in the worst case they haven’t recommended anything more than very small cuts in the rate of growth of Social Security.

Next up, here’s the Reuters rolling poll of millennials for the past couple of months: 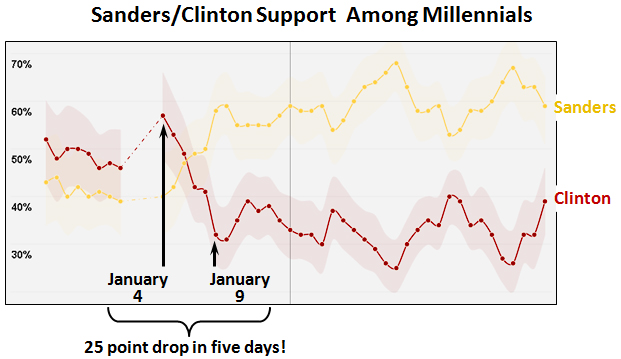 There are two things to notice. First, Sanders isn’t ahead 85-15. He’s ahead by about 60-40. That’s not all that surprising. Second, although Hillary Clinton has been losing millennial support steadily since the middle of last year, there was a huge change over the course of only five days at the beginning of January. Even taking into account poll noise, that’s fairly astonishing. What happened during that week? Nothing comes immediately to mind.

What else? Clio Chang offers a couple of additional economic observations: “While unemployment has dropped to 4.9 percent overall, it is at 16 percent for those between the ages of 16 and 19, and 8.2 percent for 20-to-24-year-olds….Young people today are also much less likely to have employer-sponsored health care than in the past.” Here’s unemployment among millennials compared to the overall unemployment rate: 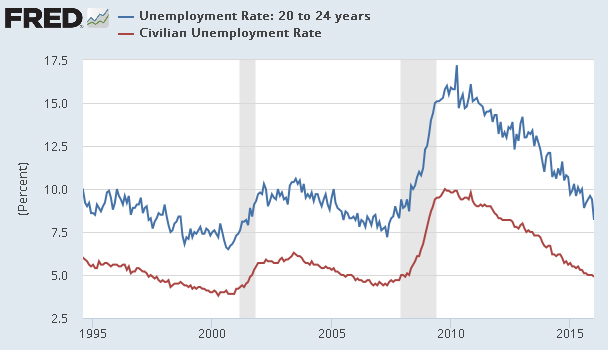 They move pretty much in sync, and the unemployment rate for 20-24 years olds is about the same as it was in the mid-2000s. On health care, however, Chang is certainly right. Employer health care coverage has steadily declined since 2000, and the cost of health care borne by workers (premiums + out-of-pocket costs) has gone up 21 percent just in the past six years: 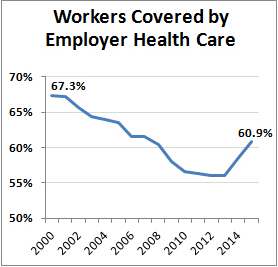 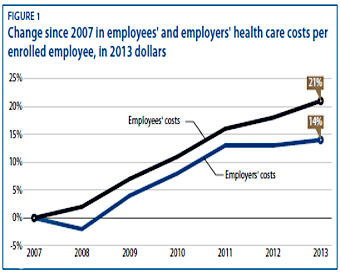 This is a big deal, though it’s worth noting that it’s affected everyone, not just millennials. If anything, millennials might be less affected by this since they generally have lower health care needs than older workers.

Dasha Burns suggests that college-educated millennials feel betrayed by the lack of good jobs after they graduate: “Morale really hit a low as we were figuring out how to pay (or repay) for college while realizing the promised exchange of higher education for good job was a myth from generations past.” But according to EPI, unemployment among college grads has recovered to nearly pre-recession levels while the college wage premium has continued to rise steadily. And although college grads suffered income hits during the Great Recession, so did everyone else. In fact, college grads actually fared better than most other groups: 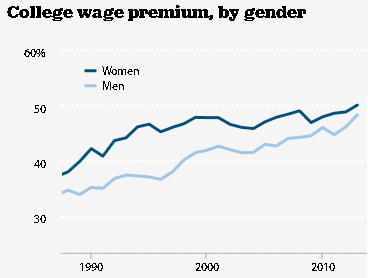 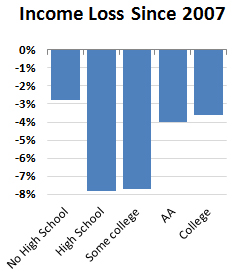 With the exception of student debt, the problems of millennials generally seem little different than those of middle-aged workers. Both have been hit by higher health care costs. Both have suffered through wage stagnation for decades, followed by wage decline during the Great Recession. Both suffered high unemployment following the financial crash, and both have recovered at about the same rate. But if that’s the case, why does Bernie Sanders appeal so strongly to millennials but not to older voters?

Needless to say, there’s only so much that raw data can tell you, especially when it presents a very mixed picture. Maybe it’s dispassionately policy based: they like Bernie’s dovish foreign policy and hawkish Wall Street policy. Maybe it’s all up to intangibles: millennials are simply more attracted to a passionate, straight-talking idealist than middle-aged voters are. Or, for all the talk of how gloomy millennials are, maybe it’s because they haven’t given up. They’re still willing to take a flyer on a guy who says he can fix things without endless compromise.

And assuming it’s not just a statistical artifact, there’s the mystery of the huge Bernie surge during five days in January. What’s up with that?

Beats me. As I said at the top, hypotheses non fingo. I don’t know what’s really going on and I’m not going to pretend otherwise. Take all this data for what it’s worth—which might be nothing.