Did Bernie Sanders vote against the auto industry rescue, as Hillary Clinton says? This morning on Twitter I called the question “fair game,” and a couple of friends suggested I was being an insufferable Hillary shill for saying this. Maybe so! But in an effort to cement my insufferable shillosity, let’s take a look at this in more detail. I have two or three points to make.

Before we get to that, a brief bit of background. On December 11, 2008, the Senate took up a standalone auto rescue bill. Bernie Sanders and Hillary Clinton both voted for it, but it was killed by Republicans. The next day President Bush announced that he would fund a small, interim auto rescue himself. “Given the current weakened state of the U.S. economy,” his press secretary said, “we will consider other options if necessary including use of the TARP program to prevent a collapse of troubled automakers.” A week later Bush used money from the first $350 billion tranche of the TARP bank bailout to do just that. In January, president-elect Obama asked Bush to request a release of the second TARP tranche, which he did. This came to a vote in the Senate on January 15, 2009. Clinton voted yes and Sanders voted no. Several months later, 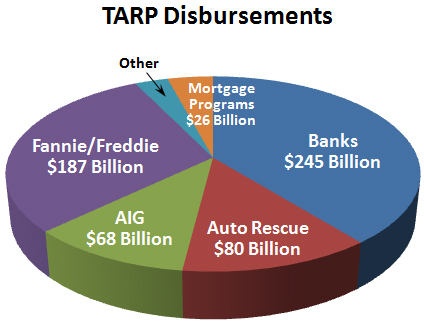 Obama used money from this second tranche of TARP to fund his final auto rescue plan.

Those are the facts. Now let’s get to the messier arena of interpretation and compromise.

First: TARP was primarily a bank bailout. Everyone agrees about that. But did senators also know that it might be used to fund an auto rescue? Michigan senator Debbie Stabenow claims that this was common knowledge: “A lot of folks said we shouldn’t do it because somehow it was helping the banks,” she said a few days ago. “It was the auto bailout we were talking about. I was very clear with colleagues that we had to do this.”

But Stabenow is a Clinton supporter, so she might be stretching things a bit. Let’s take a look at contemporaneous reporting:

January 13: “We had a sense, based on the representations that were made at the time, that it [the first TARP tranche] was about saving the financial system,” [Mitch] McConnell said. “The outgoing administration then ended up using it for an automobile bailout. And I think I’m safe in saying that that diminished significantly the enthusiasm among Republicans for the second tranche of the TARP.”

January 14: On the other side of the aisle, many Republicans who voted for the first tranche of the TARP were leery about this second vote, because at least $23.4 billion of the initial outlay has been used, over their objections, to bail out the auto industry.

January 15: Some conservatives…also maintain that the enormous bailout plan has illegally grown beyond its original focus on the financial services industry to include a bailout of the auto industry and more.

January 15, letter from Larry Summers to Congress urging release of TARP II: “Firms in the auto industry, which were provided assistance under the EESA, will only receive additional assistance in the context of a comprehensive restructuring designed to achieve long-term viability.”

It’s pretty clear that the auto rescue was a live subject at the time, and there was widespread concern that TARP funds might be used for the auto industry. TARP was unquestionably a bank bailout bill, but it’s hard to sustain an argument that no one at the time envisioned it being used to rescue the auto industry too.

Second: Hillary Clinton’s attack on Bernie Sanders is so common it’s practically a cliche. She’s pointing to a huge bill with a thousand provisions and then criticizing Bernie for voting against one of them—even though it was really the other 999 he opposed. It’s not especially admirable for Hillary to stoop to this, but on a campaign smear scale it rates about a 3 out of 10. It’s practically a sport in Congress to introduce bills whose only real purpose is to force your opponents to cast a vote that can later be denounced.

Third: Beyond the tedious campaign attacks and the semantics of the auto rescue, there really is an important issue here. Bernie took a look at a big, complicated TARP bill and decided that its good points weren’t enough to justify bailing out a bunch of Wall Street zillionaires. Hillary made the opposite judgment. Since resolving this kind of dilemma is a pretty common state of affairs in congressional legislation, it tells us something important about how they view the legislative process and the world in general.

As it happens, I supported TARP. Even with all its faults, I thought it was vitally important to pass something that demonstrated a commitment by the federal government to keeping the financial system afloat. There are plenty of others who disagree, including a number of economists I respect. But no matter how much it rankles, the banks needed to be rescued—and in my view, they needed to be rescued in a very dramatic, very public, very deep-pocketed way. I just wasn’t willing to risk the economy on anything less, even if that meant giving the president almost unfettered discretion to use the money as he saw fit.

If you agree, then Hillary’s pragmatic willingness to compromise looks pretty responsible and Bernie’s intransigence looks pretty reckless. But if you think TARP was a blank-check travesty that did little more than give a bunch of free money to big banksters and the shaft to ordinary homeowners—and you’re willing to bet the ranch that it wasn’t really necessary anyway—then Hillary looks like a lackey of Wall Street and Bernie looks prescient.

That’s a genuine argument. It’s not the argument we’re having, of course, because presidential campaigns don’t really lend themselves to abstract governance issues like this. But it’s probably the best way of viewing it. Was TARP, in the end, a pretty good deal? Or should we have risked holding out for better oversight and more restrictions on how the money was used? Generally speaking, Hillary is the candidate of the former and Bernie is the candidate of the latter. Make your choice.