I’ve now written my quota of one non-Trump post this morning, and surely that’s enough? So let’s move on. I’m fascinated to see that Joe Weisenthal picked up on something that I noticed too during Trump’s late-night press conference on Tuesday:

Notice that he kept saying “I disavow” over and over again, but never said “I disavow David Duke” or “Disavow white supremacist groups”

Here’s what happened. A reporter asked Trump once again to comment on the David Duke/KKK endorsement, and Trump whined that he had already written a Facebook post and a tweet and, really, just how many times was he supposed to disavow the guy? But as Weisenthal points out, Trump repeatedly said “I disavow, I disavow, I disavow,” without ever mentioning who he was disavowing. And since the reporters weren’t given mics, you really couldn’t hear what the question was about. You’d only know if you’ve been following this controversy.

I don’t think this was a mistake. Trump has done it too many times. On Facebook, on Twitter, on Good Morning America, and then again last night. His ritualistic phrase is “I disavow” without providing a clear, simple soundbite about who or what he’s disavowing. Nor does he ever say anything more in the way of condemnation. His Twitter and Facebook posts, for example, had merely this terse comment: “As I stated at the press conference on Friday regarding David Duke- I disavow.”

It’s pretty clear what’s going on here. Technically, Trump is in the clear. He has disavowed David Duke. But there is no soundbite or video snippet that shows him clearly criticizing either Duke or the KKK or white supremacist groups in general. And as 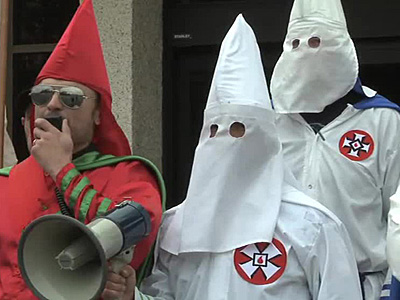 Trump knows better than anyone, it’s audio and video excerpts that really matter. That’s what people see, not brief Twitter or Facebook posts.

Trump now has the best of all worlds. He can truthfully say that he’s repeatedly denounced David Duke. He can mock the media for unfairly making a big deal out of it. But for his less savory supporters, there’s no video of him clearly and unequivocally condemning the Duke or the KKK—and they understand perfectly well what this means. They’re old hands at the wink and the nod.

If it were anyone else, I’d say this was all carefully calculated. But Trump has such an instinctive grasp of TV that I wouldn’t be surprised if this just came naturally to him without any real thought. He is truly a master of the modern media era.

UPDATE: This is fascinating. One minute after publishing this, I wandered over to The Corner and read a Jonah Goldberg post making exactly the same point I did. Goldberg doesn’t think Trump’s phrasing is an accident either:

It is obvious to me that Trump didn’t want to denounce David Duke and the Klan in the Jake Tapper interview. The “bad earpiece” explanation is a transparent lie….And when Tapper mentioned the KKK, Trump still didn’t say, “Wait a second . . . ” and rip into the Klan. The question is, Why?

….Denouncing the Klan should be easy. You shouldn’t have to think about it….The one thing you shouldn’t do is sound like you’re reluctant to condemn the Klan(!) or that you’re dog-whistling that you don’t really mean it when you do. Yet when you watch the Tapper interview, it becomes clear what is really going on: He think condemning the Klan will hurt him with conservatives or southerners or both….In other words, the issue isn’t that conservative opponents of Trump think he’s a Klan supporting racist, it’s that Trump thinks many of his conservative supporters are. And that’s just one reason I don’t want this guy speaking for me.

Yep. And when was the last time Goldberg and I agreed about something? It just goes to show that Trump really does bring people together.