Yesterday, following the disruption and melees at Trump rallies in St. Louis and Chicago, I wrote this: “Both sides have a point: Trump should be allowed to hold rallies, but he shouldn’t be allowed to pretend that he’s not consciously encouraging both the protests and the increasing violence.”

I stand by that. At the same time, Trump is running for president. He’s running to be the leader of the nation, and he has a choice: he can try to de-escalate the tension or he can pour fuel on the flames, risking a serious outbreak of violence. He’s now clearly chosen the latter route. Here he is on Meet the Press, talking about the supporter who

sucker punched a protester who was being led out of a Trump rally:

CHUCK TODD: I’m just curious, do you plan on paying for the legal fees of this older gentleman in North Carolina who sucker punched the protester?

DONALD TRUMP: Well, I’m not aware. I will say this. I do want to see what that young man was doing. Because he was very taunting. He was very loud, very disruptive. And from what I understand, he was sticking a certain finger up in the air. And that is a terrible thing to do in front of somebody that frankly wants to see America made great again.

….CHUCK TODD: And that condones a sucker punch though?

DONALD TRUMP: No, as I told you before, nothing condones. But I want to see. The man got carried away, he was 78 years old, he obviously loves his country, and maybe he doesn’t like seeing what’s happening to the country.

….CHUCK TODD: It’s possible you could help him with legal fees, if this man needs it?

DONALD TRUMP: I’ve actually instructed my people to look into it, yes.

And here he is talking about a guy who tried to rush the stage at a rally on Saturday:

CHUCK TODD: You praised the secret service, but then you said the man had ties to ISIS, that turned out to be a hoax. Did you go over the top there on that? Where did you get that—

DONALD TRUMP: No, no, no, no. He was, if you look on the internet, if you look at clips….He was waving an American flag. 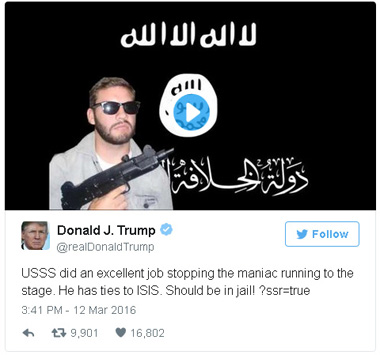 CHUCK TODD: Well, it turned out to be a hoax. Somebody made that up, sir.

….DONALD TRUMP: Well, I don’t know what they made up. All I can do is play what’s there.

DONALD TRUMP: No, excuse me, you didn’t see the clip….He was dragging the American flag on the ground like it was a piece of garbage, okay? I don’t like that….But you have to check it before you ask the question.

CHUCK TODD: Well, I — no, we have checked it. That’s my point, sir. There’s no ties to ISIS for this man. No law enforcement official. And this video that you linked to appear to be a hoax.

….DONALD TRUMP: It looked like the same man to me….Now, I don’t know. What do I know about it? All I know is what’s on the internet.

CHUCK TODD: I want to button this up a little bit, because this violence on the campaign trail, it’s got a lot of people concerned. And I guess why won’t you go up on stage and ratchet it back?

….DONALD TRUMP: The reason there’s tension at my rallies is that these people are sick and tired of this country being run by incompetent people that don’t know what they’re doing on trade deals, where our jobs are being ripped out of our country….They’re not angry about something I’m saying. I’m just a messenger.

….DONALD TRUMP: What have I said that’s wrong?….The fact is, they’re really upset with the way our country is being run. It’s a disgrace.

Yesterday I said that Trump had a right to hold rallies without having them disrupted so badly that he can’t speak. He’s not Hitler, after all. Today, I’m a lot less sure of that.