As we all know, millennials don’t care much for Hillary Clinton. That’s okay. I’m on the other side of that particular fence, but there’s plenty of room for honest differences about her views and whether they’re right for the country—differences that I don’t think are fundamentally rooted in age.

But there’s one issue where I suspect that age really does trip up millennials: the widespread belief that Hillary isn’t trustworthy. It’s easy to understand why they might think this. After all, Hillary has been surrounded by a miasma of scandal for decades—and even if you vaguely know that a lot of the allegations against her weren’t fair, well, where there’s smoke there’s fire. So if you’re familiar with the buzzwords—Whitewater, Travelgate, Vince Foster, 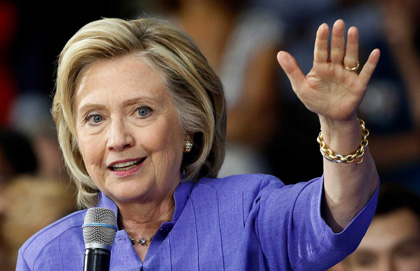 the Rose law firm, Troopergate, Ken Starr, Benghazi, Emailgate—but not much else, it’s only human to figure that maybe there really is something fishy in Hillary’s past.

But many of us who lived through this stuff have exactly the opposite view. Not only do we know there’s almost literally nothing to any of these “scandals,” we also know exactly how they were deliberately and cynically manufactured at every step along the way. We were there, watching it happen in real time. So not only do we believe Hillary is basically honest, but the buzzwords actively piss us off. Every time we hear a young progressive kinda sorta suggest that Hillary can’t be trusted, we want to strangle someone. It’s the ultimate proof of how the right wing’s big lie about the Clintons has successfully poisoned not just the electorate in general, but even the progressive movement itself.

I bring this up because I had to blink twice to make sure my eyes weren’t fooling me this morning. Jill Abramson has followed Bill and Hillary Clinton for more than two decades, first in the Washington bureau of the Wall Street Journal, then at the New York Times, where she eventually became Washington bureau chief (and even later executive editor). Her perch gave her an unrivaled view into Hillary’s actions. Here’s what she had to say today in the Guardian:

I would be “dead rich”, to adapt an infamous Clinton phrase, if I could bill for all the hours I’ve spent covering just about every “scandal” that has enveloped the Clintons. As an editor I’ve launched investigations into her business dealings, her fundraising, her foundation and her marriage. As a reporter my stories stretch back to Whitewater. I’m not a favorite in Hillaryland. That makes what I want to say next surprising.

…Many investigative articles about Clinton end up “raising serious questions” about “potential” conflicts of interest or lapses in her judgment. Of course, she should be held accountable. It was bad judgment, as she has said, to use a private email server. It was colossally stupid to take those hefty speaking fees, but not corrupt. There are no instances I know of where Clinton was doing the bidding of a donor or benefactor.

…I can see why so many voters believe Clinton is hiding something because her instinct is to withhold…Clinton distrusts the press more than any politician I have covered. In her view, journalists breach the perimeter and echo scurrilous claims about her circulated by unreliable rightwing foes.

As Abramson suggests, there are times when Hillary is her own worst enemy. The decades of attacks have made her insular and distrustful, and this often produces a lawyerly demeanor that makes her sound guilty even when she isn’t. As a result, the belief in Hillary’s slipperiness is now such conventional wisdom that it’s almost impossible to dislodge. I just checked Memeorandum to see if anyone was discussing Abramson’s piece, and I was unsurprised to find that it’s gone almost entirely unnoticed.

But the truth is that regardless of how she sometimes sounds, her record is pretty clear: Hillary Clinton really is fundamentally honest and trustworthy. Don’t let the conservative noise machine persuade you otherwise.