The lead-crime hypothesis is simple: lead poisoning in childhood affects the brain in ways that produce more violent crime later in life. If it’s true, then cohorts born after about 1980, when leaded gasoline started being phased out, will have a lower rate of violent crime. The flip side, unfortunately, is that cohorts born before 1980 are ruined for life. The brain damage is permanent and there’s no cure. So they’ll have a higher propensity for violence their entire lives.

In more concrete terms, the low-violence cohort is currently age 35 and under. The high-violence cohort is over age 35. Now, it turns out that cohort-level trends aren’t easy to sort out because the data on crime rates over time don’t include the age of the offender. But there are a few proxies that can give us a clue about whether different age cohorts are truly acting differently. Over at the Washington Monthly, Mike Males, a researcher at the Center on Juvenile and Criminal Justice, has one: 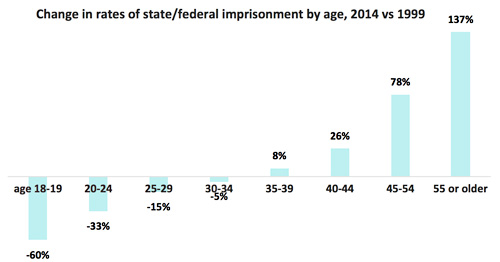 Males comments on the stunning nature of these trends:

….The size of these generational trends is staggering. In 1994, criminal arrests of Americans under age 25 peaked at 6.7 million. Since then, their arrests have plummeted by 3.1 million through 2014 even as the teen and young-adult population increased by nine million. Meanwhile, arrests rose among Americans ages 25-39 (up 1.7 million) and 40 and older (up 600,000).

For those offenses most likely to lead to imprisonment — major (Part I) property, violent, and drug crimes — the generational shift intensifies. Since 1994, annual arrests for these offenses among Americans under age 25 fell by nearly 800,000, and also declined among ages 25-39 (down 260,000). But annual arrests for these Part I and drug offenses rose by 270,000 among ages 40 and older.

There is pretty much nothing that will ever definitively prove the lead-crime theory. The data we’d need just doesn’t exist. But the cohort effect that Males highlights here is very consistent with it. Younger cohorts are becoming less and less violent, which is what you’d expect as lead poisoning has steadily dropped since 1980. Meanwhile, older cohorts have remained violent and have accounted for an increasing share of state and federal incarceration.

The good news is that people generally become less violent with age, so a large percentage increase in imprisonment of 55-year-olds doesn’t represent a lot of crime. And of course, time marches on. Today the cutoff age is about 35. By 2036 the cutoff age will be 55, which means that essentially the entire population will be free of serious lead poisoning and will likely be significantly less violent than today.

You may thank the EPA for this.