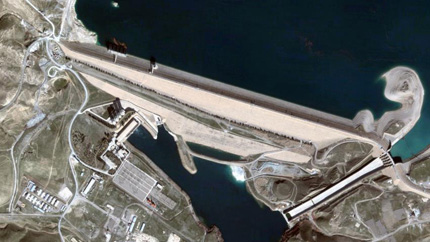 The Mosul dam in Iraq was apparently flawed from the first day it was built. The only thing that kept it standing was maintenance performed literally continuously:

“We used to have 300 people working 24 hours in three shifts but very few of these workers have come back. There are perhaps 30 people there now,” [Nasrat] Adamo said in a telephone interview from Sweden, where he works as a consultant. “The machines for grouting have been looted. There is no cement supply. They can do nothing. It is going from bad to worse, and it is urgent. All we can do is hold our hearts.”

At the same time as the bedrock is getting weaker and more porous, the water pressure on the dam is building as spring meltwater flows into the reservoir behind it. Giant gates that would normally be used to ease the pressure by allowing water to run through are stuck.

….“The fact that the bottom outlets are jammed is the thing that really worries us,” said [Nadhir] Ansari, now an engineering professor at the Luleå University of Technology in Sweden. “In April and May, there will be a lot more snow melting and it will bring plenty of water into the reservoir. The water level is now 308 metres but it will go up to over 330 metres. And the dam is not as before. The caverns underneath have increased. I don’t think the dam will withstand that pressure.

“If the dam fails, the water will arrive in Mosul in four hours. It will arrive in Baghdad in 45 hours. Some people say there could be half a million people killed, some say a million. I imagine it will be more in the absence of a good evacuation plan.”

I don’t know anything about the politics of this situation—apparently Baghdad is dawdling on a contract to repair the dam—but this sure seems like the kind of thing America could offer help with. If you want to win hearts and minds and demonstrate why Iraqis should prefer an alliance with the US to the chimera of ISIS, what better way than an emergency airlift of money, equipment, and engineers to keep this dam intact?