I’ve been periodically making the case that Americans aren’t really all that angry about the economy, which naturally implies that the economy isn’t the reason for Donald Trump’s success. This argument has taken several forms. First, in objective terms, the economy is in decent shape. Second, the number of people affected by globalization (lost jobs, reduced wages) isn’t that large in absolute terms. Third, polls indicate that concern about the economy isn’t especially high by historical standards. And fourth, polls also indicate that overall personal financial comfort is fairly strong.

Over at National Review, Scott Winship makes yet another argument: exit polls don’t suggest that Trump is winning an outsize share of voters who say the economy is their #1 issue:

Interesting! But there’s another way of looking at this: How did Trump do among “economy” voters compared to his overall performance in each state? If economic anxiety is really driving Trump’s ascent, you’d expect these voters to support him in large numbers. Here’s how that turned out: 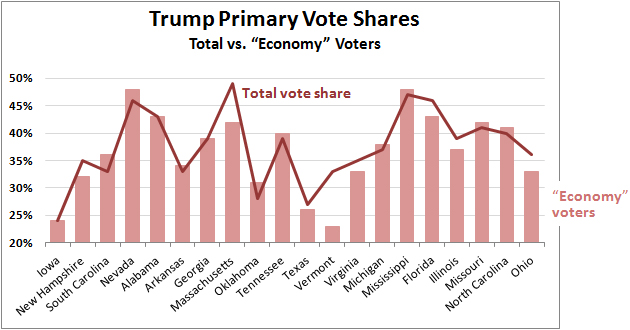 Trump actually does slightly worse with voters who are concerned with the economy than he does overall. This is yet more evidence that economic anxiety just isn’t a big factor driving Trump’s success. The bigger factor, by far, is immigration, and Winship argues persuasively that this is not primarily an economic concern. It’s a cultural concern:

For many, it is about national security, as reflected in the draconian suggestion that Muslims be barred from coming to the United States. For others, immigration is simply about the rule of law….For a non-negligible subset of Trump voters, anti-immigration sentiment is about racism and nativism, plain and simple. Many more are uneasy about rapid cultural change….People value ways of life for understandable reasons; when their permanence is thrown in question, it is reasonable for them to be anxious about change.

The rest of Winship’s piece is an argument about cultural traditionalists vs. “cultural cosmopolitans,” and your mileage may vary. I don’t really buy it, myself: culture-war issues have been front and center for a long time, and it’s not clear to me that cultural anxieties among conservatives are any more pronounced this year than in the past.

Generally speaking, I don’t think any of the issues that pundits talk about are any more pronounced this year than in any other. People aren’t more angry, or more bigoted, or more scared than usual. It’s just that we didn’t have a guy like Trump fanning these flames quite so crudely in past elections. This year we do.