Let’s scold the millennials today, shall we? Russell Dalton put together some data on political engagement among various age groups over the past few decades, and sure enough, he concludes that young ‘uns just aren’t as engaged as they used to be. Conversely, old folks are much more engaged.

Millennials in 2016 are significantly less likely to vote or try to influence others vote than were the ’80s generation in the 1987 survey, or the first wave of postwar baby boomers in 1967. But millennials display 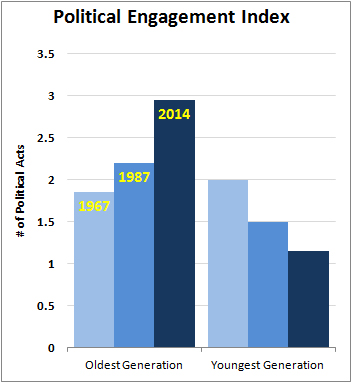 about the same level of political interest as the youngest generation did in 1987….At the same time, a widening age gap in participation occurs at both ends of the life cycle….Older Americans in the two later surveys are significantly more active than seniors were in 1967.

The chart on the right shows this pretty dramatically. In 1967 there was very little difference between the youngest and oldest voters. By 1987 a gap had opened up, and by 2014 that gap had become a chasm. Millennials are still interested in politics, and they still work with others on political issues. They just don’t vote. Dalton tries to put the rosiest possible spin on this:

The widening participation gap between the less involved youth and the very involved elders in 2014 might not mean that millennials — or “kids these days” — don’t care. Rather, it could be that the long slope of differences by life stage is getting steeper, with less involvement in youth and more involvement in later life. And even this widening participation gap is largely based on millennials reluctance to vote, while remaining engaged in other ways.

….Lower youth turnout is not a sign of a broad malaise. Millennials are about as interested in politics as youth in prior generations, and about as politically active outside elections….If we look at the full range of political activity, millennials are good democratic citizens — at least as much as their elders were in their youth.

I dunno. I think Dalton protests too much. The political engagement gap is genuinely huge, regardless of whether millennials say they’re interested in politics. And no argle bargle about the “long slope of difference by life stage” explains this. Voting isn’t all that big a chore, and if millennials don’t do it, it means either that their political engagement really is low or that they simply don’t believe that voting makes any difference. But which is it?