The CDC reports that the suicide rate was up again in 2014, and the Washington Post immediately offers some possible reasons. I’ve added numbers for easy reference:

(1) Last decade’s severe recession, (2) more drug addiction, (3) “gray divorce,” (4) increased social isolation, and even (5) the rise of the Internet and social media may have contributed to the growth in suicide, according to a variety of people who study the issue.

But (6) economic distress — and dashed hopes generally — may underpin some of the increase, particularly for middle-aged white people. The data showed a 1 percent annual increase in suicide between 1999 and 2006 but a 2 percent yearly hike after that, as the economy deteriorated, unemployment skyrocketed and millions lost their homes.

There’s much more to say about this, but millions of our fellow citizens — friends and neighbors — are experiencing existential crises that are far beyond the ability of politics to solve. With civil society faltering, families fracturing, and millions of Americans “bowling alone,” the human toll will only continue to rise. God forgive our nation for believing we could build a culture without you.

Let’s slow down a bit. The causes of suicide are complex, and correlations are hard to prove. Still, there are a couple of things we can say. First, there should at least be a correlation if you’re claiming causation, and second, the purported cause 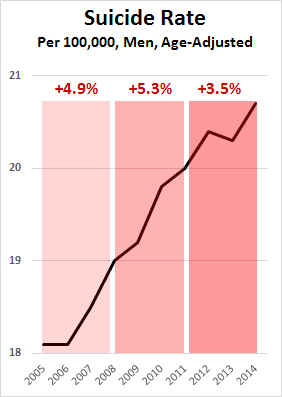 With that in mind, let’s look at recent suicide rates for men. Not only does this help us control for gender, but it’s also a less noisy set of data since men commit suicide at nearly 4x the rate of women. It turns out that suicide rates barely budged between 1999-2005, so I’m going to look only at 2005-14. The chart is on the right, with suicide rates divided into three 3-year buckets. Here are some things we can say based on this and other data in the CDC report:

We also know that suicide is up only among whites and Native Americans, but not among Hispanics or African-Americans. So any theory about the rise of suicide needs to at least engage with what might cause this. Are whites more economically distressed than blacks? That seems distinctly unlikely. Do they have higher drug addiction rates? Higher social isolation? More family fracturing? Maybe, but I’d like to see the evidence. And what about overall life satisfaction rates? They seem to have been quite stable over the past few decades. This doesn’t suggest that growing existential angst is the cause.

My point here is not really that the increase in suicide rates can’t possibly be due to any of these things. A deeper dive might implicate any of them. What’s more, a lot of these possible causes affect a lot of people. But although suicide has seen a large percentage increase since 2005, in absolute terms it’s only gone up by about 1000 per year. That’s a small number, which makes it really hard to tease out from large-scale effects. A mere 1 percent change in the Gallup life satisfaction index, for example, represents a couple of million people, so it’s unlikely to give us much insight into relatively tiny changes in the suicide rate.

So what is my point? Just this: writers need to be careful not to casually project their own sentiments or guesses onto a topic like this. Sure, the Great Recession might be the cause of more suicides. Maybe existential crises and fracturing families are the cause. Opioid abuse could be a factor. But just because these all seem plausible doesn’t mean they’re true. Likewise, just because you personally don’t like the direction of American culture doesn’t mean they’re true either—no matter how true they seem. None of them should be tossed out casually.

For my money, we flatly don’t know what’s causing the increase in suicides over the past decade. Based on the size of the numbers and the evidence at hand, if you put a gun to my head I’d probably guess opioid abuse was the biggest cause. But I don’t know, and I’m not sure anyone else knows either.