Greg Sargent channels the conventional wisdom that Hillary Clinton’s negatives are old and baked into the cake, while Donald Trump’s could get even worse than they are now:

[Hillary Clinton] has been subjected to intense scrutiny for over two decades. Note that Trump’s attacks on her are largely rehashes: He’s going after Bill Clinton’s affairs and Hillary Clinton’s alleged role in “enabling” them….While it’s possible that a renewed focus on all these things could damage Clinton further, it’s more likely that they will accomplish little, because they don’t represent new information.

By contrast, we simply don’t know yet what is out there in the record on Trump….One Dem opposition researcher has estimated that approximately 80 percent of negative stuff out there on Trump has yet to surface publicly — and they continue to do so. Which means it’s possible that Trump’s negatives have more room to grow (as preposterous as that might seem) than Clinton’s do.

This seems like the right way to bet, but I’m a little less sure. On the Hillary side, negatives that are widely accepted can actually be easier to confirm than new ones. If Trump keeps banging away on “Corrupt Hillary,” a lot of people might start remembering all that old stuff that they’d forgotten about during the past decade. And this could be easier than we think, since there are also a substantial group of Bernie supporters these days who are doing everything they can to help this narrative along.

On the Trump side, yes, his negatives have room to grow. But the opposite is true too. If a lot of people haven’t really been paying attention to the campaign yet, it’s quite possible that they might decide the guy isn’t really as bad as rumors have it. Sure, he’s not entirely PC, but he speaks his mind! He’s going to bring back jobs from China! He’s a man of the people!

Then again, maybe they’ll eventually figure out that he’s just another plutocrat Republican who plans to cut the hell out of tax rates for the rich, something a lot of people apparently don’t believe yet. But that’s not a certainty. For some reason, voters and pundits alike seem to give Republicans a pass on their tax plans, shrugging them off more as totems than as actual intentions.

In other words: I don’t know. This is not a normal year and Trump is not a normal candidate. But there’s one more thing to point out: if Pollster’s algorithms are to be believed, Trump’s negatives are actually about the same as Hillary’s and they’re both trending upward at about the same slow but steady rate. The only real difference is that Trump’s ratings are more variable than Hillary’s. This isn’t necessarily good news for Democrats. 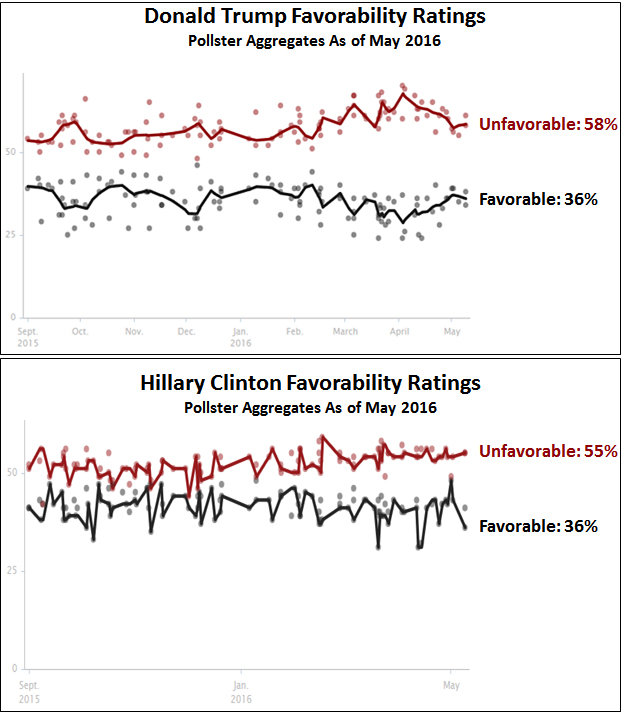