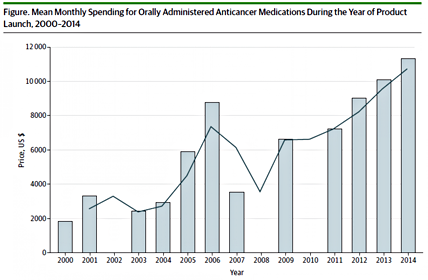 Cancer drugs are expensive. No surprise there. But Carolyn Johnson reports on a study showing that they’ve become spectacularly more expensive over time:

The [study] examined 32 cancer medications given in pill form and found that their initial launch list prices have steadily increased over the years — even after adjusting for inflation. The average monthly amount insurers and patients paid for a new cancer drug was less than $2,000 in the year 2000 but soared to $11,325 in 2014.

Shazam! That makes the rise of university tuition seem like peanuts. Still, at least prices should go down as time goes by and competing medications come to market. Right? No siree:

A study published Monday in Health Affairs examined what happened to the prices of two dozen cancer drugs after launch and found that pharmaceutical companies on average increased prices 5 percent above inflation each year. That inflation dwarfed ameliorating effects from competing drugs being introduced, which resulted in an average discount of about 2 percent. And the biggest hikes — of about 10 percent — coincided with the drugs receiving approval for other conditions. In other words, when a drug became useful to a larger number of patients, the price shot up.

The findings highlight the often mind-boggling ways that drug prices behave. Launch prices for cancer drugs have soared over time; after launch, those prices also increase steadily, despite competition from other treatments and even as the drugs are used by more patients.

Off the top of my head, I can think of a couple of ways this makes sense. First, pharma companies might well price new cancer drugs moderately in order to get them on formularies and build up market share. Then, once they’ve been approved and doctors start to get familiar with them, they raise the price a bit each year. No one’s going to remove a drug from their approved formulary just because of a measly little 5 percent price increase, after all.

Second, cancer drugs can legitimately become more valuable over time. It’s one thing to have the original clinical studies, but the true efficacy of a new drug is still a bit iffy until oncologists start prescribing it in large quantities and get personal experience with it. Once that happens—assuming the results are good—demand for the drug goes up and the market will bear a higher price. When doctors find a drug that produces good results with acceptable side effects, they quite reasonably get attached to it.

That said, I’m guessing that the main driver of these price increases is because they can. Without these drugs, you die. That makes it pretty tough for an insurance company to say no regardless of what the price is.