Here’s a fascinating bit of raw data from Amnesty International: 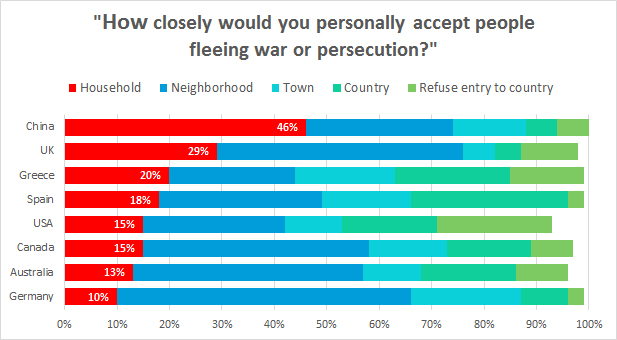 I tend to discount polls asking vague question about “accepting” refugees, but this one included the option of saying that you’d take refugees into your home. That’s about as concrete as being hit in the head by a brick, but the answers are still remarkably positive. In Great Britain, which has a reputation for being pretty unfriendly toward immigrants in general, nearly a third say they’d make room for refugees in their homes. In Greece, which is ground zero for the refugee crisis, 20 percent nonetheless say they’d take them in. And in Germany, which has accepted hundreds of thousands of refugees—not without problems—the number is still a pretty impressive 10 percent.

Now, there are lots of details left out here. How long would people accept refugees? A few days is a lot different from a few months. Refugees from where? How much would families expect to be paid? Are they serious, or just trying to sound humanitarian to a poll taker?

I don’t know. But in America, something like 30 million people say they’d be willing to take in refugees. Donald Trump notwithstanding—that’s the 22 percent who would refuse them entry to the country completely—that’s a lot. Perhaps I shouldn’t be surprised by this, but I am.