A very brief Twitter conversation yesterday got me curious about the timeline of transgender bathroom hysteria. Where and when did it start? I’m not interested in going back to the beginning of time and regaling you with the history of Jim Crow bathroom laws and the origin of sex-segregated bathrooms in 18th-century Paris and Victorian Britain (you can see a good one of those here). I just want to know the recent history. As best I can piece it together, it goes something like this:

March 2016: The North Carolina legislature meets to discuss the now-infamous HB2, which requires people to use the bathroom of their birth gender. It was passed and signed into law the same day it was introduced. It was a response to:

February 2016: A new law in the city of Charlotte that effectively allowed transgender people to use bathrooms that match their gender identity. Charlotte was following the lead of San 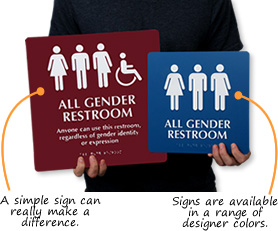 Francisco, which in turn was part of a wave of trans-friendly bathroom bills:

2015: In December, Washington State had clarified that existing law allowed transgender people to use bathrooms consistent with their gender identity. In September Philadelphia adopted rules that would require gender-neutral signage on single-occupancy bathrooms. “It’s a sign change,” said the mayor’s director of LGBT affairs. “We’re labeling restrooms as what they are: restrooms, not gender-monitored spaces.” In July the Justice Department took the side of Gavin Grimm, a Virginia high-school student who argued that he should be allowed to use school bathrooms that match his gender identity. In April President Obama opened the first gender-neutral bathroom in the White House. These actions were largely a response to transphobic laws that had been proposed in red states all over the country:

Late 2014 and early 2015: Texas and several other states introduce “bathroom surveillance” bills that would require transgender people to use bathrooms that match their birth gender. The communications director at the National Center for Transgender Equality says the wave of new legislation seemed to be a backlash to “the gains we have seen in state and local non-discrimination policies that protect transgender people.” For example:

August 2014: Austin approves a law that requires gender-neutral signage on single-occupancy bathrooms. Among others, they join Portland (one of the first a year earlier) and Washington DC, and are soon joined by West Hollywood, Philadelphia, and San Francisco. These cities were largely inspired by:

Ancient history: For our purposes this is anything more than five or six years old. A few random examples include Toilet: Public Restrooms and the Politics of Sharing, a 2010 collection of papers about (among other things) nongendered bathrooms. In 2005, U of Chicago law professor Mary Anne Case gave a presentation called “On Not Having the Opportunity to Introduce Myself to John Kerry in the Men’s Room.” She has been performing surveys of men’s and women’s bathroom facilities for years. And of course, there’s the ur-hysteria of recent decades, when Phyllis Schlafly led a campaign against the Equal Right Amendment throughout the 70s out of fear that it would lead to gay marriage, women in combat, taxpayer-funded abortions, and, of course, unisex bathrooms. We never got the ERA, but as it turned out, Schlafly was pretty much right, wasn’t she?

This timeline was surprisingly hard to put together, and it may not be 100 percent accurate. But it gives you the general shape of the river. There are two points I want make about all this. First, there’s a lot of griping about the hypersensitivity of university students these days. You know: safe spaces, microaggressions, trigger warnings, and so forth. And, sure, maybe some of this stuff is dumb. History will judge that eventually. But I’ve always found it hard to get too exercised about this stuff. These kids are 19 years old. They want to change the world. They’re idealistic and maybe too impatient with anyone who doesn’t want to move as fast as they do. So were you and I at that age. Frankly, if they didn’t go a little overboard about social justice, I’d be worried about them.

But guess what? The first concrete movement toward gender-neutral bathrooms started at universities. Now it’s becoming mainstream. Good work, idealistic college kids! This is why we should think of universities as petri dishes, not a sign of some future hellscape to come. They’re well-contained areas for trying things out. Some of this stuff dies a deserved death. Some of it takes over the world if the rest of us think it makes sense. Stop worrying so much about it.

Second: “Who started this fight?” Yes, that’s a crude way of putting it. But if we contain ourselves to the last decade or so, the answer is: liberals. Before then, the status quo was simple: men used one bathroom and women used another. It was liberals who started pressing for change, and the conservative protest was a response to that.

As I’ve said before, we should be proud of this. Most of the right-wing culture war is a backlash against changes to the status quo pushed by liberals. And good for us for doing this. The culture war is one of our grandest achievements of the past half century. It’s helped blacks, gays, women, immigrants, trans people, the disabled, and millions more. Sure, conservatives have fought it all, but that’s only natural: they’re conservatives. What do you expect?

So own the culture war, liberals! Why are we always blaming such a terrific thing on conservatives?