Jared Bernstein takes on one of my favorite hobbyhorses today: the supposed anger of the American electorate. He concludes that, yes, the economy is in pretty decent shape, but:

For every statistic you can find, I can find one that tells if not a different story, a more nuanced one. Yes, the jobless rate is 5 percent, but the underemployment rate, juiced by 6 million part-timers who want full-time jobs, is a considerably less comfortable 9.7 percent. No question, wages are rising, but the major source of real income growth over the past year has been low inflation. Paychecks aren’t growing so fast as much as prices have been growing a lot more slowly.

….So I think I get why some people are unsatisfied with the economy and beyond. Growth hasn’t reached all corners by a long shot, and policymakers have too often been at best unresponsive to that reality and at worst, just plain awful.

I think this misses the point. Sure, no economy is perfect, certainly not this one. So of course you can always find plenty of things to kvetch about.

But why bother when you can just ask people directly how they’re doing? If you do that, you’ll find that their responses are fairly positive: better than in 2009, worse than in 1999. But overall, pretty unremarkable. No matter how many economic statistics you haul out, the bottom line remains the same: on average, Americans don’t say they’re 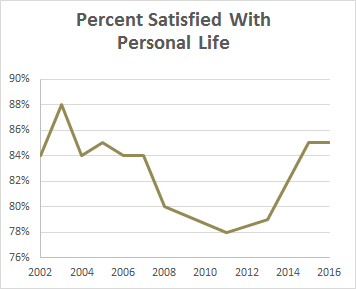 any more or less happy about the economy than they usually are. So unless they’re lying, the economy just isn’t a big factor in the anger driving this year’s election.

So why are voters so angry? That’s a good question, except for one thing: it assumes that voters are angry in the first place. It’s true that if you go out and talk to people, you can find plenty of angry folks. That’s always the case, but it’s completely meaningless. The only interesting question is: Are Americans angrier than usual? It sure doesn’t look like it, does it?

You can take a look at every poll you want, and what you’ll find is that, generally speaking, Americans just aren’t unusually unhappy or unusually angry right now. They just aren’t. There’s virtually no serious data to suggest otherwise.

Except for one thing: Americans are pissed at the government. Especially Republicans. Among Democrats, trust in government since 1980 has bounced around a bit depending on who’s president, but it’s generally in the range of 20-40 percent. Among Republicans it’s more like a range of 10-60 percent: 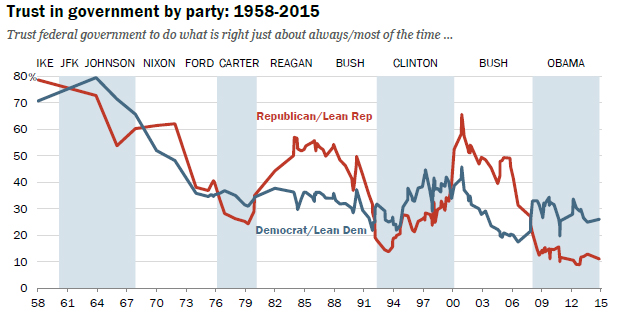 Right now, trust in government is around 30 percent among Democrats, which is pretty average. But among Republicans it’s at a blood-boiling 10 percent—and has been for the past eight years. Obama’s presidency—presumably egged on by Fox News etc.—has sent them into an absolute rage about the government.

So if you want to know what’s going on, that’s it. In general, the economy is OK. Americans are fairly satisfied with their lives. Consumer sentiment is fine. Right track/wrong track has been pretty steady. Only one thing has really changed: The Republican base is furious about the Obama presidency.

That’s it. That’s your anger right there. That and nothing more.