Keith Humphreys points out today that California used to be a solidly Republican place. But then Republicans reacted to the state’s growing non-white population by supporting the infamous Proposition 187:

Like any Californian I can attest to the venomous, racially-divisive nature of the debate that surrounded it. Republican Pete Wilson publicly embraced the measure at every campaign stop, and rode anti-immigrant sentiment to re-election with strong support from White voters. In the process, Wilson and those who advised him to double-down on white voters permanently crippled the California Republican Party. Subsequent Democratic Presidential candidates have not even bothered to campaign in this minority-majority state; why should they?

….The California lesson for the national GOP as party leaders debate whether to not to embrace Donald Trump? Racially divisive appeals to alienated white voters can work, but pursuing such short-term electoral rewards is a route to long-term political oblivion in an increasingly diverse America.

This is the conventional wisdom, and I’ve never questioned it. For some reason, though, I got curious about it today. Here’s what California has looked like in presidential elections over the past 35 years: 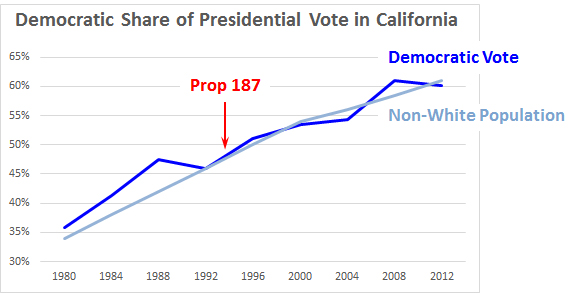 Unless I made a mistake somewhere, Prop 187 had precisely zero effect. As the non-white population of California rose, the Democratic share of the presidential vote rose in almost perfect tandem. After 1994, it continued growing at the same rate as ever.

This is just the presidential vote, and maybe things are different in other contests. But I’d be interested to see someone take a more detailed look at this. The real lesson here seems to be that Donald Trump’s racist blatherings are likely to have no effect at all on the Republican Party. Non-whites don’t like Republicans, and will go on not liking them.

Bottom line: Extra doses of racism probably don’t hurt Republicans. Minority voters already know the score, so they don’t care much. Until the Republican Party actively goes after the racism in its ranks and actively tries to appeal to non-white voters, it doesn’t matter much what else they do.