He is not just unprepared — he is temperamentally unfit to hold an office that requires knowledge, stability and immense responsibility. [Applause] This is not someone who should ever have the nuclear codes — because it’s not hard to imagine Donald Trump leading us into a war just because somebody got under his very thin skin.

….He has said that he would order our military to carry out torture and the murder of civilians who are related to suspected terrorists — even though those are war crimes. He says he doesn’t have to listen to our generals or our admirals, our ambassadors and other high officials, because he has — quote — “a very good brain.” [Laughter] He also said, “I know more about ISIS than the generals do, believe me.” You know what? I don’t believe him.

….It’s no small thing when he suggests that America should withdraw our military support for Japan, encourage them to get nuclear weapons, and said this about a war between Japan and North Korea — and I quote — “If they do, they do. Good luck, enjoy yourself, folks.” I wonder if he even realizes he’s talking about nuclear war?

….And I have to say, I don’t understand Donald’s bizarre fascination with dictators and strongmen who have no love for America. He praised China for the Tiananmen Square massacre; he said it showed strength. He said, “You’ve got to give Kim Jong Un credit” for taking over North Korea — something he did by murdering everyone he saw as a threat, including his own uncle, which Donald described gleefully, like he was recapping an action movie. And he said if he were grading Vladimir Putin as a leader, he’d give him an A.

Now, I’ll leave it to the psychiatrists to explain his affection for tyrants. [Applause] I just wonder how anyone could be so wrong about who America’s real friends are. Because it matters. If you don’t know exactly who you’re dealing with, men like Putin will eat your lunch.

….Just look at the few things he’s actually said on the subject [of ISIS]. He’s actually said — and I quote — “maybe Syria should be a free zone for ISIS.” Oh, okay — let a terrorist group have control of a major country in the Middle East. Then he said we should send tens of thousands of American ground troops to the Middle East to fight ISIS. He also refused to rule out using nuclear weapons against ISIS, which would mean mass civilian casualties. It’s clear he doesn’t have a clue what he’s talking about.

….It also matters when he makes fun of disabled people, calls women pigs, proposes banning an entire religion from our country, or plays coy with white supremacists. America stands up to countries that treat women like animals, or people of different races, religions or ethnicities as less human. [Applause] What happens to the moral example we set — for the world and for our own children — if our President engages in bigotry?

….Imagine Donald Trump sitting in the Situation Room, making life-or-death decisions on behalf of the United States. Imagine him deciding whether to send your spouses or children into battle. Imagine if he had not just his Twitter account at his disposal when he’s angry, but America’s entire arsenal. Do we want him making those calls — someone thin-skinned 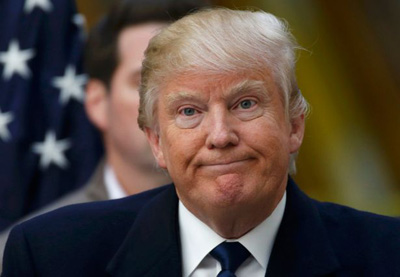 and quick to anger, who lashes out at the smallest criticism? Do we want his finger anywhere near the button?

Very nice! Hillary’s remarks seem to have left Trump relatively speechless.1 The best he could do was to claim he is “the opposite of thin-skinned”;2 that Hillary’s temperament is bad; that she read her speech badly; that she is “pathetic”; and that she killed four people in Benghazi. By Trump’s standard, this is very weak tea. All he could do was stutter the equivalent of “I know you are, but what am I?”

Apparently this speech really did get under his skin. But what can he do? His own record over the past few months shows that he’s abysmally ignorant of foreign affairs. He doesn’t know what the nuclear triad is.3 He favors Britain leaving the EU but has never heard of “Brexit.”4 He doesn’t know where Iraq’s oil is.5 He doesn’t know the difference between Hezbollah and Hamas.6 He’s blissfully unaware that Germany cares a great deal about Ukraine.7 He was taken by surprise when he learned that US companies aren’t allowed to sell planes to Iran.8 He thinks Iran is the main trading partner of North Korea.9 These are all howling bloopers. Anyone who had so much as perused a daily newspaper over the past couple of decades would be familiar with all this stuff.

Apparently Trump hasn’t done that. What’s more, over the past year, while he was running for president, he still didn’t bother. This is inexplicable, even for Trump. How is it that he hasn’t picked up more stuff just by osmosis? It’s not only scary, it’s genuinely puzzling. He obviously cares so little about foreign affairs that he actively resists learning anything about it. I guess that might ruin his prized ability to say anything he wants without letting facts get in the way.

1Note that “relatively” is the key word here. Nothing actually shuts the guy up.

2Just spitballing here, but I think the word he’s searching for is “thick-skinned.”

5Pretty much all over the country.

6Hezbollah operates in Lebanon; Hamas operates in Israel (the Gaza Strip and the Palestinian Territories).

7For example: “From the start, Merkel has played an impressive role in responding to the Ukraine crisis. In fact, her actions have allowed Germany to assume geopolitical leadership of Europe for the first time since 1945.” Or this: “In the course of the Ukraine conflict that erupted in 2014, Germany has for the first time taken the lead on a major international crisis. The main center of Western action and coordination hasn’t been Washington, Brussels, Paris, or London, but Berlin.” Or this from last year’s G7 meeting: “Germany, Britain and the US want an agreement to offer support to any EU member state tempted to withdraw backing for the sanctions on Moscow, which are hurting the Russian economy.” Etc.

9From the same interview: “Mr. Trump with all due respect, I think it’s China that’s the No. 1 trading partner with North Korea.” Trump: “I’ve heard that certainly, but I’ve also heard from other sources that it’s Iran.” Actually, it’s China, by a factor of about a thousand. Iran and North Korea have basically no bilateral trade.