Steve Randy Waldman picks up today on a brief Twitter disagreement from a few days ago. Here’s (part of) his response to my contention that racism was at the heart of Britain’s vote to leave the EU:

It may or may not be accurate to attribute the political behavior of large groups of people to racism, but it is not very useful. Those people got to be that way somehow. Presumably they, or eventually their progeny, can be un-got from being that way somehow. It is, I think, a political and moral error to content oneself with explanations that suggest no remedy at all, or that suggest prima facie problematic responses like ridiculing, 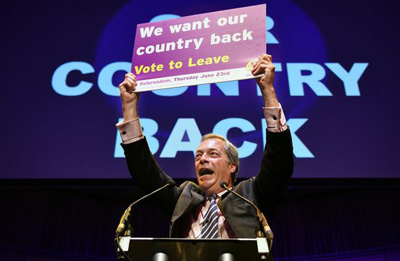 ignoring, disenfranchising, or going to war with large groups of fellow citizens, unless no other explanations are colorable.

….It seems to me that the alleged “good guys” — the liberal, cosmopolitan class of which I myself am a part — have fallen into habits of ridiculing, demonizing, writing off, or, in our best moments, merely patronizing huge swathes of the polities to which we belong. They may do the same to us, but we are not toddlers, that is no excuse. In the United States, in Europe, we are allowing ourselves to disintegrate and arguing about who is to blame. Let’s all be better than that.

I don’t have a good answer to this, and I’ve struggled with it for some time. On the one hand, the truth is important. If I believe that racism is an important driver of a political movement (Brexit, Donald Trump), then I should say so. It’s dishonest to tap dance around it just because it’s uncomfortable or politically unhelpful.

At the same time, it usually is politically unhelpful. Accusations of racism tend to end conversations, not start them—and, as Waldman says, implicitly suggest that our problems are intractable. What’s more, there’s a good case to be made that liberals toss around charges of racism too cavalierly and should dial it back. In fact, you can go even further than that. Politically, liberals might very well be off never using the R-word again.

So: should we tell the truth as we see it even if it rarely leads to any useful outcome? Or adopt softer language that skirts the issue but has a better chance of prompting engagement from non-liberals? I don’t know. But speaking just for myself, I generally try not to ridicule or demonize “huge swathes” of the country. Instead, I prefer to put the blame where I mostly think it belongs. In the post Waldman is referring to, for example, I said this about Brexit:

At its core, it’s the last stand of old people who have been frightened to death by cynical right-wing media empires and the demagogues who enable them—all of whom have based their appeals on racism as overt as anything we’ve seen in decades. It’s loathsome beyond belief, and not something I thought I’d ever see in my lifetime. But that’s where we are.

People are people. To some extent, we’re all prisoners of the environments we were raised in and the trials we’ve been through over the course of our lives. That might call for empathy and understanding as much as it calls for censure. But one thing it doesn’t excuse is politicians and media personalities who very much know better but cynically appeal to racial sentiment anyway, either for ratings or for votes. Calling out these folks for appealing to racism—or even just tolerating it—is almost certainly useful. It might not happen fast, but eventually they can be embarrassed into cutting it out. It sure is taking a long time, though.