Max Ehrenfreund passes along the latest from the Congressional Budget Office today:

Income inequality declined abruptly in 2013 after President Obama and Congress negotiated an increase in taxes on the wealthiest Americans, according to new federal data. The legislative changes resulted in the most onerous federal tax system for the rich in almost 20 years. As a result, 2013 was an unusual year for the economy, one of only a handful of years in recent decades in which inequality has decreased, outside recessions.

The CBO report is here. The reduction in inequality from the tax change is the blip at the very end of the chart: 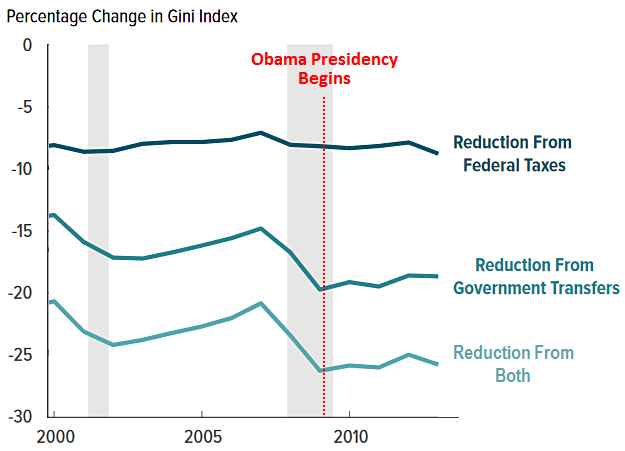 I’d take a couple of lessons from this. First: yes, taxes can affect inequality. CBO estimates that the reduction in GINI attributable to federal taxes got bigger (i.e., more negative) after the Clinton tax increase; got smaller after the Bush tax cuts; and got bigger again after the Obama tax increase. Second: these effects usually seem to wash out after a few years, reverting to the mean. Third: taxes matter, but not nearly as much as spending. Inequality reductions from government spending (Social Security, SNAP, Medicaid, etc.) are more than double those from taxes.

If you want to increase taxes on zillionaires, I’m with you. But if you really want to make a dent in inequality, you should also be eager to raise taxes across the board and then spend the money on things like pre-K, health care, and so forth. That’s probably where you’ll get the biggest bang for the buck.

Finally, for your enjoyment, here’s a chart of increasing GINI (i.e., increasing income inequality) in the United States since 1967 as measured four different ways. There’s really no good reason to include it here. However, I thought I had a point to make before realizing, after I’d finished, that I didn’t.1 There’s no good reason to waste a perfectly good chart, though, so here it is.

1This pretty much describes my entire morning, by the way.