A couple of days ago the Supreme Court released its opinion in Utah v. Strieff. The facts of the case are pretty simple. Working from an anonymous tip about drug dealing, a police detective staked out a house and then randomly detained a man named Edward Strieff as he was leaving. He had no probable cause to do this, but he did it anyway. Then he demanded Strieff’s ID, ran a background check, and discovered that Strieff 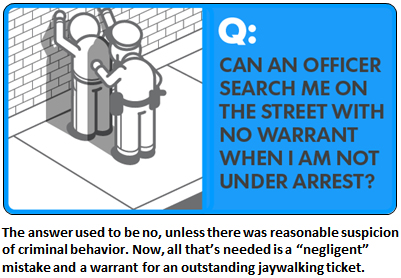 had an outstanding warrant for a traffic violation. Bingo. That was enough to arrest him and conduct a search, which turned up some meth.

There’s no argument about whether the stop was valid. It wasn’t. It was plainly unlawful, and the officer who made the stop certainly knew that. However, the court ruled that the illegality of the stop was “attenuated” by the outstanding warrant. Here is Clarence Thomas’s astonishingly cavalier decision:

Officer Fackrell was at most negligent…. two good-faith mistakes…. lacked a sufficient basis to conclude that Strieff was a short-term visitor…. should have asked Strieff whether he would speak with him, instead of demanding that Strieff do so…. his conduct thereafter was lawful…. the warrant check was a “negligibly burdensome precautio[n]”…. search of Strieff was a lawful search incident to arrest…. no indication that this unlawful stop was part of any systemic or recurrent police misconduct.

….Strieff argues that, because of the prevalence of outstanding arrest warrants in many jurisdictions, police will engage in dragnet searches if the exclusionary rule is not applied. We think that this outcome is unlikely. Such wanton conduct would expose police to civil liability.

Nickel version: There’s no reason to think that Officer Fackrell knew he was acting unlawfully. And no reason to think that this kind of “innocent mistake” happens frequently. After all, this would expose police departmentd to civil liability, and history suggests that’s plenty to deter police from illegal conduct. And anyway, everything following the illegal conduct was just standard procedure. No need to be concerned about it.

This willful exercise in ivory tower fantasy is breathtaking. Does anyone seriously believe that Officer Fackrell just made an innocent mistake? That goes far beyond garden variety naivete. Justice Sonia Sotomayor, who apparently knows a little more about the real world than Thomas, wrote a blistering dissent:

To the Court, the fact that a warrant gives an officer cause to arrest a person severs the connection between illegal policing and the resulting discovery of evidence. This is a remarkable proposition: The mere existence of a warrant not only gives an officer legal cause to arrest and search a person, it also forgives an officer who, with no knowledge of the warrant at all, unlawfully stops that person on a whim or hunch…. Remember, the officer stopped Strieff without suspecting him of committing any crime. By his own account, the officer did not fear Strieff.

….The majority also posits that the officer could not have exploited his illegal conduct because he did not violate the Fourth Amendment on purpose…. Never mind that the officer’s sole purpose was to fish for evidence….. [But] even officers prone to negligence [note the obvious sarcasm here. –ed.] can learn from courts that exclude illegally obtained evidence. Indeed, they are perhaps the most in need of the education.

….Most striking about the Court’s opinion is its insistence that the event here was “isolated”… .nothing about this case is isolated. Outstanding warrants are surprisingly common…. The States and Federal Government maintain databases with over 7.8 million outstanding warrants, the vast majority of which appear to be for minor offenses…. The Department of Justice recently reported that in the town of Ferguson, Missouri, with a population of 21,000, 16,000 people had outstanding warrants against them.

….By legitimizing the conduct that produces this double consciousness, this case tells everyone, white and black, guilty and innocent, that an officer can verify your legal status at any time. It says that your body is 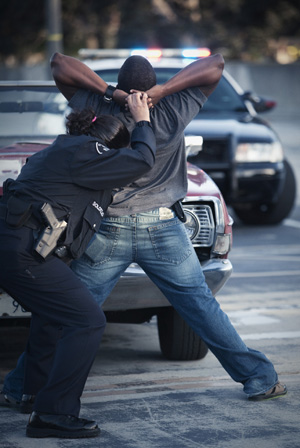 subject to invasion while courts excuse the violation of your rights. It implies that you are not a citizen of a democracy but the subject of a carceral state, just waiting to be cataloged.

There’s more, and it’s worth reading. Sotomayor marshals a considerable amount of real-world evidence in her dissent. Thomas marshals none whatsoever. One justice just blandly assumes that this whole affair was a minor mistake that shouldn’t affect the end result. The other knows perfectly well that this kind of thing happens all the time; that it happens to some kinds of people more than others; and that by legitimizing it, the court is sending a message that fishing expeditions against suspicionless pedestrians are perfectly OK. Elena Kagan, if anything, is even more dumbfounded than Sotomayor by the court’s casual indifference to how the real world works:

The majority chalks up Fackrell’s Fourth Amendment violation to a couple of innocent “mistakes.” But far from a Barney Fife-type mishap, Fackrell’s seizure of Strieff was a calculated decision, taken with so little justification that the State has never tried to defend its legality. At the suppression hearing, Fackrell acknowledged that the stop was designed for investigatory purposes—i.e., to “find out what was going on [in] the house” he had been watching, and to figure out “what [Strieff] was doing there.” And Fackrell frankly admitted that he had no basis for his action except that Strieff “was coming out of the house.”

And Fackrell’s discovery of an arrest warrant—the only event the majority thinks intervened—was an eminently foreseeable consequence of stopping Strieff. As Fackrell testified, checking for outstanding warrants during a stop is the “normal” practice of South Salt Lake City police. In other words, the department’s standard detention procedures—stop, ask for identification, run a check—are partly designed to find outstanding warrants. And find them they will, given the staggering number of such warrants on the books.

Both the opinion and the dissents are remarkable pieces of writing. But the end result is clear. Police can now stop you in hopes of finding an outstanding warrant, and if they get lucky the Supreme Court says everything they do afterward is fine. This is exactly the kind of behavior the Supreme Court is supposed to stop, not the kind of behavior they’re supposed to excuse.

This will never affect me. It will never affect anyone on the court. But will it affect the poor and the nonwhite in far greater numbers than anyone else? Oh yes. But you’d have to care even slightly about how the real world works to be worried about that. Thomas and four others don’t.