As I mentioned last night, Hillary Clinton really is significantly ahead of Donald Trump in the national polls. She’s ahead by about four points, and that’s a pretty normal winning margin in a presidential election with no incumbent running. In the New York Times, Nate Cohn says the same thing but with a lovely little graphic to make his point:

Her lead is smaller than it was last month….But she retains an advantage — perhaps by 4 percentage points nationwide, and a similar margin in the battleground states that are likely to award the electoral votes needed to win the presidency. This straightforward story can get lost in the headlines, which tend to give the most attention to the most surprising results — whether it’s a predicted Clinton landslide or a narrow lead for Mr. Trump in key states.

The truth is probably somewhere between those extremes. Pollsters aren’t joking about the “margin of error”: the inevitable random variance in polls that exists simply by chance. If Mrs. Clinton leads by 4 points, you should expect polls that show her with a big lead or locked in a tight race, with others clustered around the average. That’s more or less what we saw this past week.

As Cohn says, individual polls are likely to fall on a bell curve. I’ve recreated his chart below, with actual recent polls in blue. As you can see, it’s all perfectly normal (pun intended). 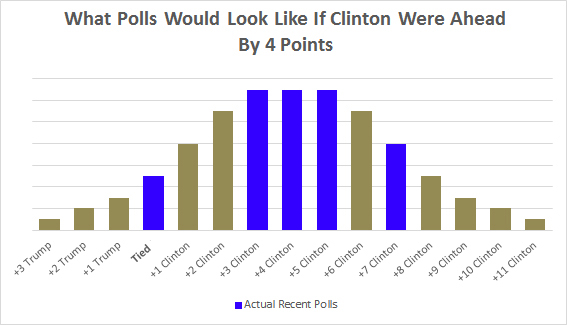