Tony Schwartz is the author of The Art of the Deal. That is to say, he’s the guy who wrote the actual words that were then packaged as a Donald Trump book. He was paid well for this work: he got half the advance and continues to get half the royalties. Here’s how that particular deal went down:

“If I were you,” Schwartz recalls telling [Trump], “I’d write a book called ‘The Art of the Deal.’ That’s something people would be interested in.”

Schwartz thought it over for several weeks….Being a ghostwriter was hackwork. In the end, though, Schwartz had his price. He told Trump that if he would give him 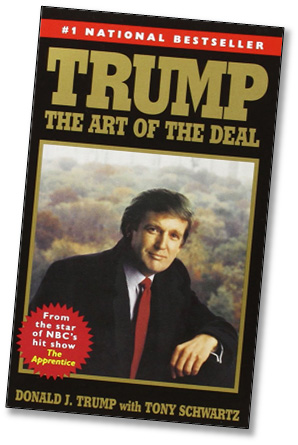 half the advance and half the book’s royalties he’d take the job.

Such terms are unusually generous for a ghostwriter. Trump, despite having a reputation as a tough negotiator, agreed on the spot.

This is pretty typical Trump. As near as I can tell, he’s actually a lousy negotiator. There are exceptions here and there, but he routinely overpays for properties he wants and routinely ends up in litigation with the people he does deals with. That’s not the sign of a great negotiator. It’s the sign of someone who can’t get the deal right the first time—and then goes to court in hopes that his partners will cave in because it’s just not worth the money to fight him. This is also why Trump has a hard time getting loans these days and doesn’t do many deals outside of licensing and branding.

But onward. It turns out that Schwartz never liked Trump much, and these days feels guilty for his part in selling him to the American public. He told his story to the New Yorker’s Jane Mayer:

Schwartz thought that “The Art of the Deal” would be an easy project….For research, he planned to interview Trump on a series of Saturday mornings…. But the discussion was soon hobbled by what Schwartz regards as one of Trump’s most essential characteristics: “He has no attention span.”

….“Trump has been written about a thousand ways from Sunday, but this fundamental aspect of who he is doesn’t seem to be fully understood,” Schwartz told me. “It’s implicit in a lot of what people write, but it’s never explicit—or, at least, I haven’t seen it.1 And that is that it’s impossible to keep him focussed on any topic, other than his own self-aggrandizement, for more than a few minutes, and even then . . . ” Schwartz trailed off, shaking his head in amazement. He regards Trump’s inability to concentrate as alarming in a Presidential candidate. “If he had to be briefed on a crisis in the Situation Room, it’s impossible to imagine him paying attention over a long period of time,” he said.

….[So] he came up with another plan. He would propose eavesdropping on Trump’s life by following him around on the job and, more important, by listening in on his office phone calls….There was not a single call that Trump deemed too private for Schwartz to hear. “He loved the attention,” Schwartz recalls. “If he could have had three hundred thousand people listening in, he would have been even happier.”

This year, Schwartz has heard some argue that there must be a more thoughtful and nuanced version of Donald Trump that he is keeping in reserve for after the campaign. “There isn’t,” Schwartz insists. “There is no private Trump.”

….He then tried to amplify the material he got from Trump by calling others involved in the deals. But their accounts often directly conflicted with Trump’s. “Lying is second nature to him,” Schwartz said. “More than anyone else I have ever met, Trump has the ability to convince himself that whatever he is saying at any given moment is true, or sort of true, or at least ought to be true.”…Schwartz says of Trump, “He lied strategically. He had a complete lack of conscience about it.” Since most people are “constrained by the truth,” Trump’s indifference to it “gave him a strange advantage.”

….Rhetorically, Schwartz’s aim in “The Art of the Deal” was to present Trump as the hero of every chapter, but, after looking into some of his supposedly brilliant deals, Schwartz concluded that there were cases in which there was no way to make Trump look good. So he sidestepped unflattering incidents and details. “I didn’t consider it my job to investigate,” he says.

….As far as Schwartz could tell, Trump spent very little time with his family and had no close friends….“He’d like people when they were helpful, and turn on them when they weren’t. It wasn’t personal. He’s a transactional man—it was all about what you could do for him.”

Just the kind of guy you want in the Oval Office: a serial liar with no attention span who doesn’t care about other people and has no interests other than his own self-glorification. Oh, and he’s a mediocre dealmaker too. Sounds perfect.

1Maybe Schwartz just needs to be reading the right people?