I can’t believe I missed this, but I did:

During two separate discussions of Black Lives Matters protests on Tuesday, Donald Trump claimed that people have called for moments of silence for 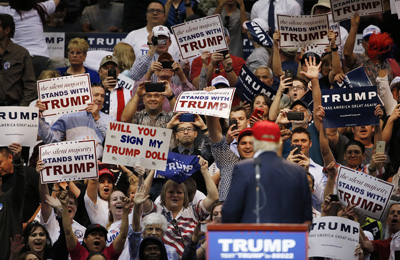 Micah Johnson, the gunman who killed five police officers in Dallas and injured nine others, without specifying who or where.

On an O’Reilly Factor segment….“I saw what they’ve said about police at various marches and rallies,” said Trump. “I’ve seen moments of silence called for for this horrible human being who shot the policemen.”

Trump repeated the claim Tuesday night, saying at a rally in Indiana, “The other night you had 11 cities potentially in a blow-up stage. Marches all over the United States—and tough marches. Anger. Hatred. Hatred! Started by a maniac! And some people ask for a moment of silence for him. For the killer!”

This isn’t getting a lot of attention. But it should….There is no evidence this ever happened. Searches of the web and social media showed no evidence. Even Trump’s campaign co-chair said today that he can’t come up with any evidence that it happened.

….A would-be strong man, an authoritarian personality, isn’t just against disorder and violence. They need disorder and violence. That is their raison d’etre, it is the problem that they are purportedly there to solve. The point bears repeating: authoritarian figures require violence and disorder. Look at the language. “11 cities potentially in a blow up stage” … “Anger. Hatred. Hatred! Started by a maniac!” … “And some people ask for a moment of silence for him. For the killer.”

Trump’s explicit race baiting has been so normalized by now that we hardly notice this stuff. This kind of talk from a major-party candidate for president should be front-page news everywhere. Instead, it warrants a few words in various campaign roundups.

Blacks, Hispanics, Muslims, foreigners of all stripes: they’re all grist for Trump’s crusade to convince white voters that they’re surrounded by rapists, murderers, terrorists, and assorted other predators who want to take their jobs away and impoverish them. It’s his whole campaign.

This is loathsome. For years it’s been clear that the Republican Party could only win by turning out an ever greater share of the white vote. But by 2012 they seemed to have done everything they possibly could: Fox News stoked the xenophobia, Republican legislatures passed voter ID laws, and outreach to white evangelicals had reached saturation levels. What more did they have on their plate? Now we know the answer: nominate a guy who doesn’t play around with dog whistles anymore. Instead he comes out and flatly runs as the candidate of white America, overtly attacking every minority group he can think of. That shouldn’t work. In the year 2016, it should alienate at least as many white voters as it captures. But so far it seems to be doing at least moderately well.

President Obama was right yesterday: America is not nearly as divided as the media makes it seem. But the only way for Donald Trump to win is to make it seem otherwise. That’s what he’s been doing for the past year, and the media has been playing along the whole time, exaggerating existing grievances where they can and inventing them where they can’t.

I’m not scared that America is such a hotbed of racial resentment that it’s about to implode. But I’m increasingly scared that Donald Trump can make it seem that way, and that the press—always in search of a dramatic narrative—will go off in search of ways to leverage this into more eyeballs, more clicks, and more paid subscriptions. There’s still time for us all to decide we should handle this differently. But that time is running out.