Stephen Rose writes in the Washington Monthly that the middle class is indeed shrinking. But this is good news—if you use a specific measure that he created for no apparent reason. Basically, he took the definitions of rich, middle class, and poor from 1979 and 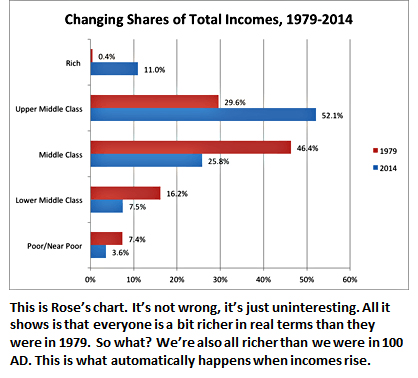 adjusted them for inflation. Then he compared that to incomes in 2014. Voila! More people are in the higher income groups.

This is uninteresting. It’s a mathematical consequence of the fact that incomes have grown in real terms since 1979. They haven’t grown by a lot for those who aren’t rich, but they’ve grown nonetheless, and that means everyone automatically moves up in 1979 terms. If we did this same exercise for the year 100 AD, we’d find that virtually everyone in the country is now part of the top 1 percent. Big deal. I honestly don’t understand what the point of this is supposed to be. It’s literally meaningless.

But I nonetheless want to point out what Rose does with his results:

The widening gulf between some middle-class Americans and their neighbors also helps to shed new light on the depth of populist anger. For most Americans, the plutocrats in the top 1% are remote figures whose standard of living is impossible to attain. But it’s another thing to be confronted by the success of those in one’s everyday experience.

As Dennis Gilbert notes in his The American Class Structure in an Age of Growing Inequality, many people without college degree feel disrespected by those with a college degree. Often when they think about the “rich,” it is anyone with $100,000 or more — not those in the true one percent earning $350,000 or more.

Rose presents no evidence that the gap between the upper middle class and the lower middle class is any greater than it’s ever been. Nor does he present any evidence that working class resentment toward the upper middle class is any greater than it was in the past. In the 50s, Joseph McCarthy pretty clearly appealed to resentment against the egghead class. In the 60s, Richard Nixon appealed to hardhats who resented elite opposition to the Vietnam War. “Reagan Democrats” are the stuff of political lore. Newt Gingrich and George Bush made hay with the resentments of evangelicals against latte-sipping liberals who looked down their noses at them. This kind of class-based resentment is nothing new.

So: Is working-class resentment against the upper middle class any greater than it used to be? There’s certainly no income-based argument that it is. Nor do I know of any poll-based evidence. Nor even any real anecdotal evidence. As near as I can tell, “real America” has been angry at coastal elites pretty much forever according to the campaign reporting we see every four years.

I wouldn’t be surprised if members of the lower middle class are more resentful of elites today than they were in the past. But I’m awfully tired of hearing this asserted endlessly based on nothing much at all. Throw me a bone, folks. Give me some real evidence that the working class is angrier than it’s ever been. Anything will do. Polls. Surveys. NSA wiretaps. Something—other than the fact that Donald Trump has a following among a group of Republican voters who have been mad at the eggheads forever and mad at Democrats ever since the Civil Rights Act was passed. What have you got?