Over at The Corner, Roger Clegg highly recommends a piece in Forbes about a new SEC proposal that would require public companies “to include in their proxy statements more meaningful board diversity disclosures on their board members and nominees.” This rule would not mandate any diversity goals. It would merely require a disclosure of current board diversity and any future diversity plans, if any. Here’s the Forbes piece:

In May, 1996, Sister Doris Gormley wrote a letter to T.J. Rodgers, the founder and then-CEO of Cypress Semiconductor. She argued that Cypress ought to diversify its board by adding some women.

Replying to her, Rodgers wrote, “Choosing a Board of Directors based on race and gender is a lousy way to run a company. Cypress will never do it. Furthermore, we will never be pressured into it, because bowing to well-meaning, special-interest groups is an immoral way to run a company, given all the people it would hurt. We simply cannot allow arbitrary rules to be forced on us by organizations that lack business expertise.”

To people who actually run business enterprises, getting sound advice from the board is important. It can help them avoid costly mistakes. But that requires deep knowledge of the specific business field. Companies have every incentive to find such people, which has nothing at all to do with the happenstance of their ancestry or sex.

If Republicans are wondering why blacks, women, Hispanics, Asians, and pretty much every non-white-male group in America seems to hate them, this is why. If you want to oppose diversity mandates, that’s one thing. There are ways to do it. But to blithely claim that the whole idea is nonsense because no board of directors in America would ever choose a board member for any reason other than pure merit? This is just willful blindness. Every black, female, Hispanic, and Asian person in the country has been a victim of this faux meritocracy argument and knows perfectly well that it’s rubbish.

All that is bad enough. But then to get high-fived for it by National Review and the Wall Street Journal and Fox News? It rubs non-white faces in the fact that conservatives not only don’t want to make any real efforts to break up the white men’s club, but that they’ll go out of their way to deny that it even exists. So they vote for Democrats. At least the Dems don’t flatly insult them with obvious baloney.

For reference, compare this to Lauren Rivera’s conclusions after sitting in on post-interview discussions of candidates for a professional services firm (via Leniece Brissett at Vox). Here’s a summary in the Harvard Business Review:

Black and Hispanic men were often seen as lacking polish and moved to the reject pile, even when they were strong in other areas, whereas white men who lacked polish were deemed coachable and kept in the running. A similar pattern emerged among men who appeared shy, nervous, or understated: Nonwhites were rejected for being unassertive, but in whites, modesty was seen as a virtue. Among candidates who made minor mistakes in math, women were rejected for not having the right skills, and men were given a pass—interviewers assumed they were having an “off” day.

Different kinds of people, it turns out, were evaluated very differently: 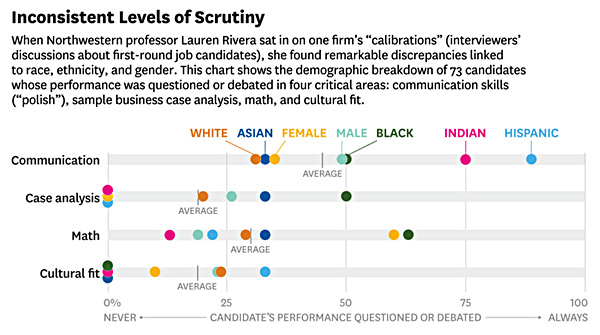 I don’t doubt that most corporate board members think they consider nothing but pure merit. But they plainly don’t. The CEO wants board members who will support him. Another board member wants to repay a favor. Another recommends someone who sits on another board with him. The others want people who will “fit in.” And in between all that, yes, there will be a few chosen for their particular expertise.

If Republicans care even a tiny bit about ever appealing to non-whites, the very least they need to do is acknowledge that non-whites face particular problems and biases that are often subtle, often unconscious, and haven’t disappeared yet. Even if they never support doing anything about it, they have to at least acknowledge this. If today’s anti-diversity harangues are any indication, they’re nowhere near that yet.