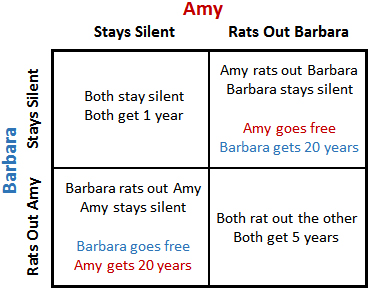 You all know about the Prisoner’s Dilemma game, right? You and a partner are arrested and taken to separate rooms. The police offer each of you the deal on the right. What should you do?

The best strategy is for both of you to clam up. You’ll each get a token 1-year sentence and then you’re free. But—if you rat out your partner, you go free while she gets 20 years. So you should rat her out. But of course, she’s thinking the same thing. So you both rat each other out and you both get 5 years in the clink. You should have clammed up!

The best strategy here depends on your partner. Can you trust her? Is she gullible? Do you hate her guts so much you don’t care about a jail sentence? There’s a whole stew of things going on. So which personality characteristics are most important in a situation like this?

James Pethokoukis points today to a new paper that sheds some light on this. A team of researchers in Spain got 541 volunteers at a fair1 to play a similar set of games over multiple rounds. Then they took all the data and let an algorithm loose to seek out clusters of common behavior. They found five. Here they are in order of prevalence:

The authors add that these basic personality types appear to be independent of both age and sex:

Our results open the door to making relevant advances in a number of directions. For instance, they point to the independence of the phenotypic classification of age and gender. Although the lack of gender dependence may not be surprising, it would be really astonishing that small children would exhibit behaviors with similar classifications in view of the body of experimental evidence about their differences from adults….Our research does not illuminate whether the different phenotypes are born, made, or something in between, and thus, understanding their origin would be a far-reaching result.

About a third of the population is in the envious subgroup, which seems to be unable to understand a win-win situation. They’re just hellbent on not losing relative status. The optimistic and pessimistic subgroups are both ego-driven: their decisions are based solely on risk aversion and don’t take into account what their partners might do. Trustful is…well, it’s what we all hope our partners are. The undefined subgroup, though undefined, “can have a strong influence on social interactions because its noisy behavior could lead people with more clear heuristics to mimic its erratic actions.”

Take it for what it’s worth. Maybe nothing. Who knows? But writing about it gave me an excuse to ignore Donald Trump for a while.

POSTSCRIPT: But wait! There’s a Trump connection after all. Doesn’t that envious subgroup seem to define him pretty well? And his followers too? If so, it suggests that his core group of supporters might be about a third of the country.

1Yes, this means it wasn’t just the usual collection of bright undergrads. All sorts of people participated, and they won tickets to the rides depending on how they did in the game.