When Twitter goes bankrupt and people need to blog again, the world will be a better place. https://t.co/UPTWpzWqcy

I can’t tell you the number of times I’ve cut off a conversation on Twitter with something like “Signing off now. Twitter is a horrible place to discuss anything more complicated than a cookie.” And it is! People try endlessly to turn it into something it isn’t, and the result is that I routinely get told to go take a look at some “epic tweetstorm” or other that “must be Storified.” Usually it turns out to be a grand total of about 300 words split up into awkward 20-word chunks. Milton would not be impressed. It could be done way better, and possibly faster, as a simple blog post.

JACK DORSEY and BIZ STONE are sitting in a dorm hallway at NYU, where they are undergrads.1 A half-smoked joint lies between them. Earlier in the day they got assigned their class project for Communications 152.

DORSEY: Oh man. “Develop a communications medium that demonstrates as many principles of accurate information exchange as possible.” WTF?

Next day. DORSEY and STONE are in DORSEY’s dorm room.

DORSEY: Hey, I had an idea. How about if we do a proof by contradiction?

DORSEY: Let’s develop the worst communications medium possible and show how it screws things up!

DORSEY: Well, good communication requires enough bandwidth to express an idea fully. Let’s limit ours to just a few words at a time.

STONE: And strong emotions interfere with accuracy. Let’s develop something that encourages outrage. That means digital. Like a chatroom or something. People are always going postal on those.

DORSEY: We could make it even worse. Maybe by screwing around with response times? 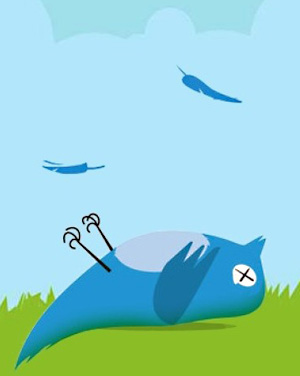 STONE: Sure. Latency should be just long enough to allow other people to barge in during the middle of a conversation. It would drive people crazy.

DORSEY: You’d never be sure who’s responding to what!

STONE: Right. And it should be wide open to everyone, so people can join in even if they have no idea what the conversation is about.

DORSEY: And then other people see the newcomers, and barge in themselves. It’s like the ultimate game of telephone.

DORSEY: Sure, because no one who piles on knows if they’re the only critic, or if thousands have already jumped in. You never really know who your audience is, which is one of the linchpins of good communication.

STONE: Nuance and tone are important too. We need to eliminate those.

DORSEY: We can do that by making messages really short. Text message sized. You can barely even speak English in text messages, let alone add caveats and nuance.

STONE: And no editing. Once you’ve said something, you can’t change it even if you realize you screwed up.

DORSEY: It’s tailor made for misunderstanding.

STONE: And if it were marketed right, highly verbal people would be its main consumers. They’d go nuts trying to carry on conversations on complex topics 140 characters at a time.

DORSEY: And the campus language police! Can you imagine how they’d react to every little miscue?

STONE: This is great. It’s like cutting out everyone’s tongues and dumping them into a big overheated room.

Twelve weeks later. DORSEY and STONE are back in the hallway.

STONE: “Interesting concept, but too divorced from reality.”

DORSEY: Man, people sure are stupid.

DORSEY: Yeah. It’ll be kind of a drag if Trump wins, though. I wasn’t really expecting that.

Ship sails into sunset. DORSEY and STONE have enigmatic expressions on their faces. Curtain.

1Yes, I know they didn’t go to college together. Work with me here.