I’ve never seen Morning Joe. It comes on at 3 am here on the West Coast, and that’s a no-go time slot. This has probably warped my view of politics, since Washington DC really does seem to set its collective watch by what Joe and Mika say each morning. To me, though, they’re just occasional ghosts that I see on YouTube clips.

Anyway, a friend writes to tell me that the topic of conversation today was the possibility of Donald Trump dropping out of the race before things get too humiliating for him. I’ve never really bought this, though I know plenty of people who think it’s a 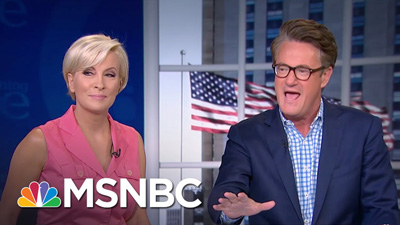 live possibility. And if it’s a topic on Morning Joe, I guess that mean it’s entered the mainstream. Here is my friend’s take:

One of the guests speculated that if the polling continued to be bad, Trump would likely try to find some way to get out that would allow him to claim some sort of victory. This makes sense because it’s very typical of deal jockeys like Trump. They will always negotiate for the best deal they can get and claim victory with the whatever they end up with—and when an investment starts to go south, they will look for an out that gives them something for their pride even if they take a loss.

What they are not, however, are turnaround artists. Turnaround people are different types of investors that tend to get into the weeds with a company, build it up and then sell it for a profit. They cheerlead management, focus on boosting morale, improving PR, etc. These are often private equity/venture capital people.

Trump has never shown himself to be a turnaround guy. If the negative polling seems to stick over the next few weeks, it wouldn’t surprise me if a creative reason for Trump to extricate himself surfaces. For example, I could see him decide to switch to a third party run on a write-in campaign (blaming the #NeverTrumpers, RNC dissenters, media, etc.). He won’t win, but he could say he ran through the election but was ultimately betrayed by the Republican elites. Whoever ends up in the hot seat for the Republican nomination would then get the “historic loss” tag and Trump could say if the elites had stuck with him, he would have done better.

I dunno. No matter how Trump sells it, this kind of thing just seems too obvious. No one would buy it. At this point, the only way he could get out and retain even a shred of credibility would be to fake a heart attack. Remember, Donald: the symptoms should be on your left side. I know you’re not into details like that, but don’t blow it.