One of the oddities of the whole Trump Foundation scandal is the fact that at least a few of the donations to the foundation were actually fees owed to Trump personally. Comedy Central, for example, gave the foundation $400,000 in lieu of paying Trump for a televised roast he attended. The Washington Post’s David Fahrenthold is on top of this, of course, and asked one of Trump’s campaign advisors about it:

“He’s never directed fees to the foundation,” said Boris Epshteyn, a senior adviser to Trump, who responded on the campaign’s behalf in a phone interview on Saturday. Epshteyn said that what Trump did was provide a service, 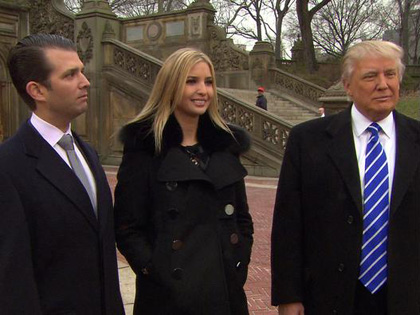 renounce any fees, and then merely suggest that the other party make a donation to a charity of their choosing.

I swear I don’t know whether to laugh or pound the keyboard at stuff like this. Epshteyn sounds like the godfather here. Trump merely “suggested” that folks donate to some charity somewhere, and it all just happened to end up at Trump’s charity.

Legally, the issue here is that if the money is owed to Trump, he has to pay taxes on it. If it goes straight to his foundation, he doesn’t. And apparently one of Eric Trump’s assistants pretty much admitted this is what happened:

Last week, an employee of the Trump Organization, the candidate’s private company, offered an explanation. “A lot of times Mr. Trump will give a speech somewhere or he’ll raise money in some way and he asks that entity, instead of cutting a personal check to him, cut it to his charity,” said Lynne Patton, an assistant to Trump’s son Eric, who is also an officer of the Eric Trump Foundation. “That’s money that otherwise would’ve been in his personal account, right?”

Trump aides threw Patton under the bus (“she wouldn’t know or understand”) and then offered a more convoluted version of the excuse that Trump never told anyone which charity to give his fees to. Legally, that meant Trump didn’t owe any taxes on the money. And then, by an enormous coincidence, the donors just happened to choose the Trump Foundation:

Trump, Epshteyn said…had not exercised control over where his money went. Indeed, Epshteyn said, when Trump helped someone, he never asked specifically for a gift to the Donald J. Trump Foundation — but rather suggested a gift to some charity, somewhere.

….So which of the Trump Foundation’s donations came in this way? Epshteyn could not cite a specific example. He then challenged The Post to find an example that proved him wrong.

The Post asked about the 2011 gift from Comedy Central….Epshteyn conceded that Trump had, indeed, controlled where this money went. It was his income. And, Epshteyn said, he paid taxes on it.

Could he provide proof of that tax payment?

No one sentient can possibly believe this nonsense. It’s obvious that Trump has long treated his foundation as a sort of personal slush fund, a handy way to have a bit of tax-free cash around to hand out like walking-around money. How is it possible that Fahrenthold is still the only reporter around who seems interested in this?