The Clinton Foundation has raised billions of dollars for worthy causes, and after a year of tenacious investigation it appears that it never influenced anything at the State Department while Hillary Clinton was there. Doug Band asked for a few favors here and there, but apparently he never got anything more than a better seat at a luncheon—and it’s not clear he even got that.

So let’s talk instead about the Trump Foundation. It’s a paltry operation that has spent only a few million dollars since the turn of the century. Donald Trump himself has contributed nothing to it over the past eight years. However, he has used Foundation money to buy himself items at charity auctions—including a six-foot painting of himself. And on the seamy side, Trump sure 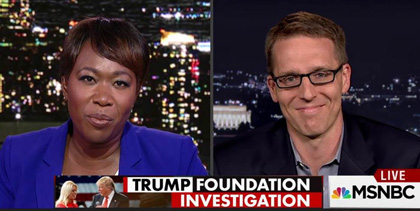 seems to have used Foundation money to try to bribe the attorney general of Florida.

So what is the Trump Foundation? That’s hard to say, but it appears to be nothing except a way for Trump to appear philanthropic by giving away other people’s money under his own name. As a way of hiding the fact that he’s astonishingly miserly about his personal donations to charity, it seems to be a great idea. But why does anyone else play along with this? David Fahrenthold of the Washington Post asked:

[Trump’s] biggest donors have not wanted to say why they gave their own money, when Trump was giving none of his.

“I don’t have time for this. Thank you,” said Richard Ebers, a ticket broker in New York City who has given the Trump Foundation $1.9 million since 2011.

“No. No. No. I’m not going to comment on anything. I’m not answering any of your questions,” said John Stark, the chief executive of a carpet company that has donated $64,000 over the years.

So did NBCUniversal, which donated $500,000 in 2012. Its gift more than covered the “personal” donations that Trump offered at dramatic moments on “The Celebrity Apprentice” — then paid for out of the Trump Foundation.

….The Trump Foundation said it had received a $100,000 donation from the Clancy Law Firm, whose offices are in a Trump-owned building on Wall Street. “That’s incorrect,” said Donna Clancy, the firm’s founder, when The Post called. “I’m not answering any questions.”

Jeez. What kind of hold does Trump have over these folks? They give him money but act like kids with their hands in the cookie jar when anyone asks them about it. Even the ones who didn’t give him money act that way. What does it all mean? People are usually proud of donating money to a charitable foundation, aren’t they?

And how is it that a billionaire can be so hellbent on never giving a cent of his own money to charity? Trump’s behavior is so pathological that this year, even after promising a $1 million donation to vets on live TV, he did his best to quietly renege on it. He finally ponied up, but only after Fahrenthold basically badgered him into it by methodically proving that he hadn’t given anyone a dime.

Of course, Trump could prove that all of us are just partisan shills by simply releasing his tax returns and demonstrating that he has too donated to charity. He doesn’t even have to release the whole thing. All we need is Schedule A for the past few years.

But we’ll never see it. I wonder why?