I have some bad news for you, though I admit it won’t be immediately obvious from this Wall Street Journal article:

Americans are starting to fight back against a wave of insurance-price increases on decades-old life policies.

Over the past year, several major insurers have notified tens of thousands of people of higher costs to keep their policies in force, with increases ranging from midsingle-digit percentages to more than 200%, according to financial advisers. To justify the increases, they blamed the impact on their investments from the Federal Reserve’s decision to keep interest rates lower for longer.

….“Companies are under a lot of pressure to boost returns in this low-interest-rate environment, and this is one lever they have,” said Scott Robinson, an associate managing director at Moody’s 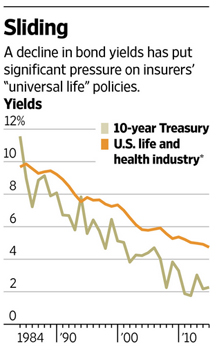 Investors Service….Life insurers have been among the companies hardest hit by the Fed’s policies, which have been mirrored by many central banks around the world. These firms earn much of their profit by investing customers’ premiums in bonds until claims come due.

So what’s the bad news, aside from the fact that a bunch of folks who bought life insurance are getting screwed? Just this: insurance company investments are doing poorly, and that means premiums have to go up. This hits life insurance first, but soon it will hit other types of insurance too—including medical malpractice insurance. This has happened three times in the past four decades, and in all three cases the result has been a tidal wave of claims that medmal suits are ruining the country and nuisance suits need to be reined in.

The evidence is pretty clear that this isn’t true. The last time I looked, during the medmal crisis of 2003, it was quite clear that neither the number of medmal suits nor the amount of money paid out had changed much. What had happened was the usual: insurance company investments were doing poorly and they raised premiums to make up for it.

So if insurance companies are once again having portfolio problems, it’s a good guess that this will hit the medmal industry sooner or later, and premiums will go up. Doctors will start screaming, and Republicans will demand caps on malpractice payouts—something that does nothing to rein in nuisance lawsuits but does hurt trial lawyers badly. And trial lawyers give lots of money to Democrats.

Maybe we’ll dodge a bullet this time. But if we don’t, and medmal premiums start rising again, keep your ears open for all the usual bogus tort reform arguments. They’ll follow just as surely as the night follows the day.