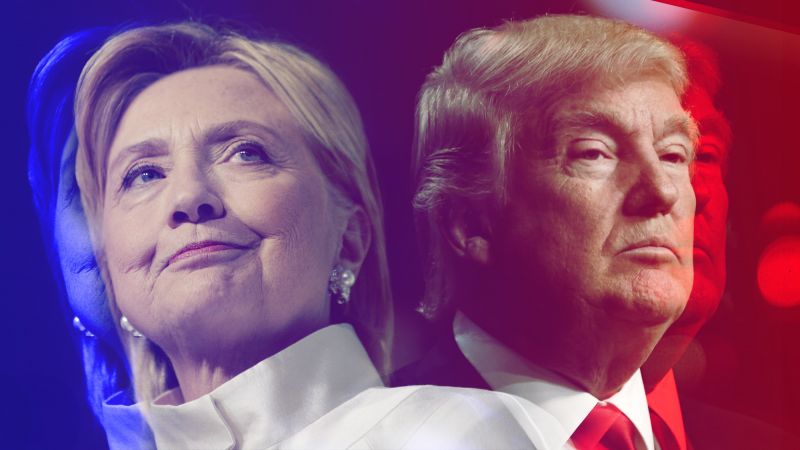 Debate Wrap-Up: I guess the only thing anyone cares about is who won. I’d give it to Hillary Clinton pretty easily. She handled her facts well, she spoke well, she didn’t get baited, she laughed at some of Trump’s more ridiculous statements, and she attacked him pretty effectively. “Just listen to what you heard,” she said when Trump tried to pretend that he did everyone a favor by forcing Obama to release his long-form birth certificate. I suspect that even Republicans in the audience laughed at that.

Trump, by contrast, was like a manic version of his usual manic self. He spoke too fast, he got practically red faced at times, he repeated the most obvious lies, and he could barely keep a coherent though together for more than a few seconds before wandering off to something else.

But then again, what do I know? Basically, Clinton acted like Clinton and Trump acted like Trump. If you like either one of them, you probably liked what you saw on the screen. And to Trump’s credit, he got his talking points across. Law and 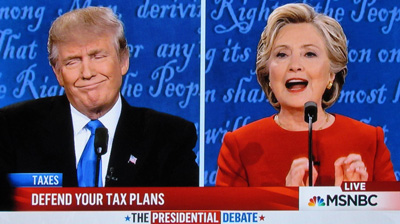 order. Politicians like Hillary are all talk, no action. Foreigners are stealing our jobs. I’m going to destroy ISIS big league.

But Trump’s howlers were just too numerous. He’s the son of a millionaire but said he started out with a “very small” amount of money. He claimed yet again that he absolutely opposed the war in Iraq—just ask Sean Hannity. He claimed he never said Clinton didn’t look presidential. He insisted that NATO started a terror division because of him. He denied ever saying that climate change was a hoax. The lies just tumbled out. Hillary’s people were responsible for birtherism, and he’s the guy who put an end to it. The IRS deliberately targets him, and only him, for audits. He never said he didn’t care if Japan built nukes. And then there was his bizarre riff about his pride over opening a club that doesn’t discriminate against African Americans. WTF?

Trump got called on all this, of course, and his strategy was simple: just deny everything. “Wrong,” he said repeatedly, talking obnoxiously over Clinton. Then, against all expectations, Lester Holt fact-checked Trump twice, but Trump just raised his voice and rode roughshod over him. Does this kind of simpleminded braying work? It all seemed like pretty obvious charlatanism to me, but maybe not to everyone else. Maybe they came away thinking that Trump says one thing and Clinton says another, and who knows, really?

I have a little more faith in the American public than that, though. I think Trump did poorly, both in what he said and how he said it. He was manic about proving that he was the alpha male in the room, but I think he took it at least three or four notches too far. It was not a winning night for him.

A complete transcript of the debate is here.

Liveblogging is so quaint, isn’t it? Not like all this newfangled Twitter and Snapchat nonsense that the kids are into these days. But I haven’t fully mastered the art of communicating in emojis or 140-character chunks, so Grampa Drum will keep on kicking it old school.

The biggest buzz around this debate is the question of whether moderators should fact-check the candidates. This is an oddly misplaced issue. Debate moderators rarely perform fact checking, and I doubt that Lester Holt will do it tonight. What the good ones do is follow up. So you’ll get something like this: “But Mr. Trump, when the war was being debated in Congress, you said you supported it. I can play the tape if you’d like. Why do you keep saying you opposed it?” Or: “But Secretary Clinton, you supported TPP for years. What suddenly made you change your mind earlier this year?”

This is fact-checking in a manner of speaking, but it’s not the moderator acting as judge. It’s just the moderator demanding that candidates answer questions without evasion, which is very much a moderator’s job. We’ll see how well Holt carries it out tonight.

And now, on with the debate.

10:36 – Trump: “I was going to say something very rough about Hillary…but I decided not to. It wouldn’t have been right.” Uh huh.

10:34 – Holt: “You said Clinton doesn’t have a presidential look.” Trump: “No, I said she doesn’t have the stamina.” Holt: “The exact statement was…” Trump: “I’m answering the question.” He won’t allow Holt to correct him.

10:27 – Holt: “Do you support the current US policy on nuclear weapons?” Trump probably has no idea what our current policy is. But he does say that he wouldn’t support a first strike.

10:24 – Trump said earlier that Iran was about to collapse before we bailed them out with a treaty. Clinton says they were weeks away from having the material for an atomic bomb. Obama stopped that “without firing a shot.”

10:22 – Trump on Clinton: “I have a much better temperament than she does.” Laughter.

10:18 – Trump says that NATO opened a terror division “largely because” of his criticisms. His egotism is beyond belief.

10:12 – Clinton on ISIS: “I think there are a number of issues we should be addressing.” I get that she’s the policy wonk, but I really think she’d do 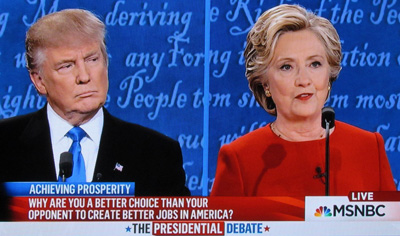 better if she didn’t literally telegraph that a laundry list is forthcoming.

10:09 – Trump says he’s been endorsed by ICE. I wonder how many viewers misheard that as ISIS?

10:04 – Trump is saying he got “great credit” for opening a club in Palm Beach that doesn’t discriminate against African Americans. Holy shit. If that’s the bar we’re using, I have a long, long list of things that make me into the second coming of Martin Luther King. Just yesterday, I went the entire day without running over any black people!

10:02 – Clinton: “Just listen to what you heard.” Laughter. Now Clinton is straight up accusing Trump of racism.

10:01 – Trump flatly won’t say what changed his mind. Then he says he did everyone a favor by forcing Obama to release his long-form birth certificate.

9:59 – Birtherism! “What took you so long to admit Obama was born in the US?” Trump is blaming it all on Sidney Blumenthal.

9:55 – Clinton now talking about implicit bias. I doubt that many viewers will really get this. Trump’s response: You invented the word “super-predator.”

9:54 – Clinton says there are too many “military style guns” on the streets.

9:49 – So far, nothing from Trump that’s really about improving race relations. “There are bad things going on.”

9:45 – Now we’re onto race. Clinton wants police reform and taking guns away from “people who shouldn’t have them.”

9:43 – Jesus. Trump is just all over the place. Clinton isn’t blowing anyone away, but she’s making sharp points and mocking Trump effectively. Trump’s answer is to mock policy as “just words.”

9:42 – Clinton says Trump has declared bankruptcy six times. Trump: “We used certain laws that were there.”

9:40 – Trump’s main theme is that the country is in terrible shape and it’s all the fault of politicians like Clinton.

9:38 – Trump says he hardly owes anything to anyone. He is “under-leveraged.”

9:35 – Clinton says Trump won’t release his taxes because he’s probably concealing something “horrible.” “There’s something he’s hiding.” “Who does he owe money to?”

9:33 – Trump is implying that the IRS has deliberately targeted him for audits.

9:31 – Trump is shaking his head and rolling his eyes at everything Clinton says. Now it’s his turn. The country is in a bubble. The economy is about to collapse thanks to people like Clinton. Blah blah blah.

9:27 – Is Trump on speed? He’s talking a mile a minute and only barely making sense.

9:26 – Now Trump is yelling about Clinton having fought ISIS for 30 years. Huh?

9:23 – Trump: “You changed your view on TPP after you heard what I said about it.” Clinton: “Donald, I know you live in your own reality….” Trump is interrupting constantly now and practically shouting.

9:21 – Now Trump is getting red-faced. “NAFTA is the worst trade deal ever approved anywhere.”

9:13 – Trump: My father gave me a “very small” amount of money when I started out. Then he follows with a completely wrong riff on VATs in other countries. Then he makes a show of calling Clinton “Secretary Clinton.” “Is that all right? I want you to be happy.”

9:10 – Trump refers to Clinton as “Hillary.” Clinton refers to Trump as “Donald.” So friendly!

9:05 – And we’re off. First question: Why are you the best choice to create jobs for the American people?

8:57 – Surfing around the channels, the hot topic is whether or not Hillary Clinton will kneel during the national anthem. No, wait. That’s not right. The real topic seems to be whether Donald

Trump can simulate a grown-up for a full hour and a half. Also whether Hillary Clinton is too serious about this whole presidency thing. I’m not joking.

8:55 – Tonight’s debate will be 90 minutes without a break. Is that normal? I don’t really care about the candidates, but I could use a bathroom break once in a while. Not to mention a blather break.