How much does Donald Trump earn in a year? During Sunday’s debate he said he made $694 million last year, but that’s a lie. That figure represents revenue: that is, how much his various enterprises took in. You have to subtract expenses, interest on loans, and so forth to get to net profit, which is what gets passed through to Trump as personal income. Any child running a lemonade stand knows this. Selling $5 worth of lemonade doesn’t mean you made any money if you also had $5 in expenses for sugar, lemons, cups, and payoffs to your little brother to go play somewhere else.

So then: how much did Trump’s enterprises actually earn? Nobody knows, but MoJo’s Russ Choma has uncovered a revealing nugget. Trump’s records show that he’s highly dependent on revenue from his golf courses: they pulled in 42 percent of his 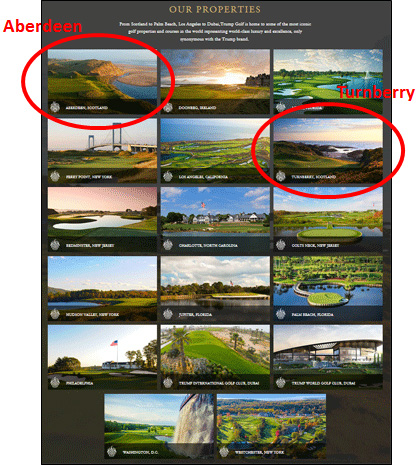 total revenue, or $296 million. But how much did they earn in profit? Nobody knows that either. But we do know how much two of his golf courses earned:

Trump’s FEC financial form noted that his two Scottish golf courses earned him a combined $23 million in “golf related revenue” last year….But the public filings the courses submitted in the United Kingdom tell a much different story….When interest, depreciation, and currency exchange losses are factored in, Trump’s Turnberry course lost over $2 million in 2015. And the corporate filings in the United Kingdom show that Trump’s Aberdeen course lost about $1.6 million.

That means that Trump’s reported income on the FEC financial disclosure forms regarding just these two projects is $26 million more than what they actually made. If these courses are representative of Trump’s overall finances—$23 million in “golf related revenue” is really a $3 million loss—his declared $296 million in total “golf related revenue” may well be highly overstated.

“Highly overstated” indeed. In fairness, Trump’s more established courses are likely to be more profitable than his newer Scottish ones, but even if his golf courses are well run, they’d be lucky to pull in net earnings of 10-15 percent. If Trump paid too much for them and has run them poorly—which seems likely—his golf earnings might be more like 3-4 percent. That’s in the neighborhood of $10 million or so. Or maybe zero. Who knows?

There’s no question that Trump is a rich man. Even independent observers figure his net worth is around $3 billion. And with that kind of wealth, he almost certainly makes a lot of money even if he manages his businesses poorly. But $694 million? Not a chance. I’d wager that his income is in the range of $50-100 million.