One of Donald Trump’s favorite words is “strong.” He came out “strongly” against the Iraq War. Vets who are “strong” don’t get PTSD. We have to be strong against ISIS, strong on law-and-order, strong against illegal immigrants, and strong on guns. On Wednesday, he even preemptively insisted he’d eventually be strong on an issue he knew nothing about:

I’m gonna take a very strong look at it and I will come very strongly one way or the other. I will have an opinion.

Trump was in Nevada and was asked about the nuclear waste facility being built at Yucca Mountain. He actually admitted he knew nothing about it, but then said that once he did know something—BOOM! He’d be strong. Very strong.

In other Trump news, we learn that back during his bankruptcy days, Trump’s own lawyers always met with him in pairs. Why?

In other words, Trump lied to his own lawyers so routinely that they had to have backup whenever they met with him. His. Own. Lawyers.

Elsewhere, we learn that Asian-Americans really, really don’t like Trump. This is from the Fall 2016 National Asian American Survey, released yesterday: 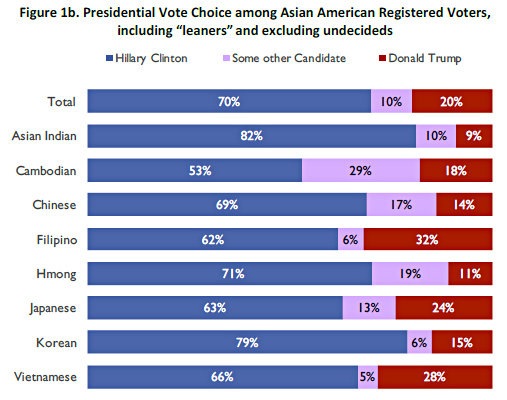 Trump is losing to the rest of the field by ratios of 2:1 all the way up to a staggering 10:1, with an average of 4:1 against him. That’s bad, but I’m not sure it’s strongly bad. He needs to up his game. I don’t think he’s insulted Asian-Americans lately,1 but if he did he could probably drive his support down to 15 percent or even lower. Come on, Donald.

1But then again, maybe he has. It’s hard to keep up.