Harvard’s Institute of Politics has just released its latest poll of 18-29 year olds, and reports that Hillary Clinton has a “massive” lead over Donald Trump. Over at the New York Times, however, Yamiche Alcindor says the new poll shows that Clinton has “struggled” with millennials and “will have to convince many young people that they should trust her to grapple with some of the nation’s biggest issues.” Nancy LeTourneau is annoyed:

That is the power of narrative. Once you buy into the idea that Clinton is having trouble with millennials, it is almost impossible to break out of it. In the back of Alcindor’s mind, she has to do better than a 28 point lead to 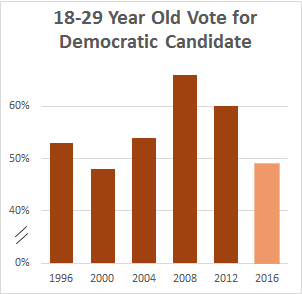 be successful with young people. Who knows how high that bar is?

I get the exasperation with this, but the problem is that both the IOP and Alcindor are right. Clinton leads Trump 49-21 percent in the IOP poll, which is indeed a massive lead. At the same time, 49 percent support is less than Democrats usually get from 20-somethings. Like it or not, Clinton is less popular with young voters than any Democrat in the past two decades except for Al Gore. Is this because of the Bernie effect? Because of Clinton herself? Because third-party candidates are getting more attention than usual? That’s hard to say. But whatever the reason, Clinton is underperforming with millennials.

Now, at this point her underperformance is fairly modest compared to anyone other than Barack Obama. And she still has a couple of weeks to make up ground. It’s fair to say that she’s a little behind the usual pace for Democrats, but it’s not fair to regurgitate the narrative from two or three months ago when she was struggling pretty hard with millennial disaffection. It may not make for a great story, but sometimes the truth is a little bit boring.