The withdrawal of Aetna from many of its Obamacare markets has unleashed a torrent of commentary about how Obamacare is now well and truly doomed. From Republicans, this is the usual hot air. From Democrats, it’s a little different. It’s also way overblown, and I’m happy to see Jonathan Chait make the case for Obamacare’s basic solvency here. Go read it.

So what happened? For some reason, insurers underpriced their policies substantially when Obamacare was introduced. It’s possible that their actuaries all badly miscalculated the makeup of the market. Or it’s possible that 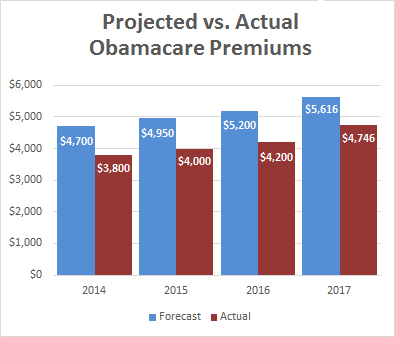 they were underpricing deliberately as a way of building market share. Or maybe a combination of both.

My own guess is that the underpricing was mostly deliberate. After all, even the Congressional Budget Office had a pretty good idea of what average premiums ought to be, and it’s hard to believe that a bunch of experienced insurance companies couldn’t do the same math as the CBO. Either way, though, this is, once again, life in a free market. Some vendors make mistakes and fail. Some can’t compete and fail. Some just decide to focus on other markets.

The flip side of this is that free markets usually stabilize eventually. In the case of Obamacare, this means premiums have to go up. Sorry. However, as that happens, new insurers are likely to enter. Eventually supply will more or less equal demand, and the market will find an equilibrium. This is why I’m much less panicked over Obamacare’s immediate problems than most people.

Obamacare is an artificial market in many ways, but that’s true of health care in general, which is highly regulated and has well-known eccentricities. Nonetheless, Obamacare is a market, and right now it’s operating like one. Prices are looking for an equilibrium, consumers are deciding whether to participate, and vendors are jockeying for position. That’s not painless, but then, nobody ever said capitalism was painless.

Of course, if you do want painless, we know how to do that too: true national health care funded through taxes. Dozens of countries do this, and it works fine.

Short of that, we could still reduce the pain considerably. Is Obamacare too expensive for many people? Yes. That could be fixed by increasing subsidies. Are insurers losing money in the early years? Yes. That could be largely fixed by funding the risk corridors. Are the poor still underserved? 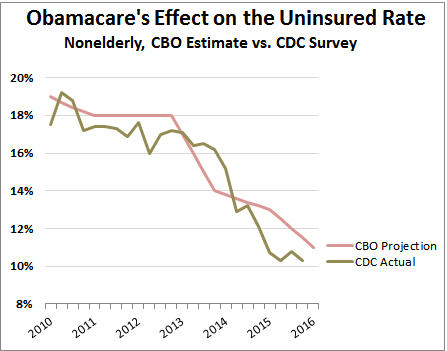 If Republicans actually cared about providing health care to people, all of this would be trivial. But they don’t. To the extent that Obamacare has problems, this is why. There’s nothing inherent in the design that prevents it from operating successfully. In fact, as the chart on the right shows, even now, with all its problems, Obamacare is operating more successfully than anybody thought it would when it was first passed. 20 million newly insured people is nothing to sniff at.