Good news comes in all sorts of forms. Today it comes from WikiLeaks, which has been promising for a while that it would release devastating new leaks about Hillary Clinton on Tuesday, news that Trump fans have been eagerly awaiting. Well, Der Tag arrived this morning in London, 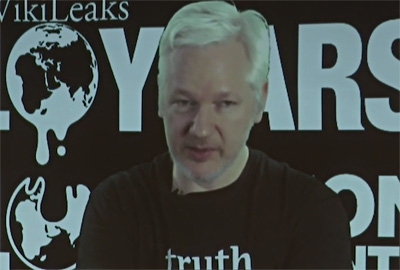 and it turns out that October Surprises aren’t what they used to be:

Over the course of two hours Tuesday—with the world’s media and bleary-eyed Trump die-hards across the United States tuning in—Assange and other WikiLeaks officials railed against “neo-McCarthyist hysteria,” blasted the mainstream press, appealed for donations and plugged their books (“40 percent off!”). But what they didn’t do was provide any new information about Clinton—or about anything else, really.

The much-vaunted news conference, as it turned out, was little more than an extended infomercial for WikiLeaks on the occasion of the 10th anniversary of its founding.

…That didn’t go over well with Trump backers who had stayed up through the night, thinking they’d be watching live the unveiling of the death blow to the Clinton campaign. Assange, as it turns out, had taken a page from Trump’s own playbook by drawing an audience with a tease, only to leave those tuning in feeling that they’d been tricked.

Ha ha ha. If Trump can fool the nation’s media into giving him an hour of free nationwide publicity for his new hotel by promising a birther bombshell, then it’s only fair that WikiLeaks can go to the same well and play publicity-mongering head games too. And who better to play head games with than Donald Trump’s own supporters?1

It’s remarkable the number of disparate enemies Clinton has made. There are all the usual Arkansas Project alumni here in the United States, of course. There are the Bernie die-hards. There’s Vladimir Putin, who took personal exception to Clinton’s suggestion that Russian elections were not entirely on the up-and-up. And there’s Julian Assange, who hates Clinton because—well, it’s not clear why. She’s a corporatist warmonger, of course. But more particularly, she’d really like to see Assange in jail, and Assange seems to view that as unfriendly.

They say you can judge a person by the enemies she makes. On that score, I guess you’d have to say that Hillary Clinton has done pretty well for herself.

1Assange, for his part, says he’s been totally misunderstood. He actually has nothing against Hillary Clinton. And he’s still got some “US election-related documents” that he’ll release before November 8. Stay tuned!!!