There are lots of wingnut sites that traffic in conspiracy theories and urban myths. But that’s not all. There are also fake news sites, deliberately crafted to look real and fool people into believing outrageous stories. The most infamous at the moment is the Denver Guardian, which peddled a fake story written in pseudo-AP style about an FBI agent involved in investigating Hillary Clinton’s emails who was found murdered. Sites 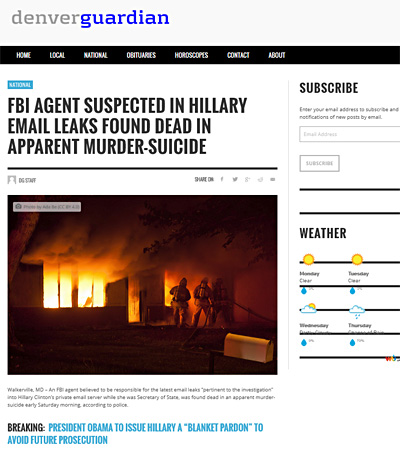 like Google and Facebook should work harder to eliminate junk like this from their search results and news feeds, and in Facebook’s case it turns out they have a pretty good idea of how to do it. But Gizmodo reports that they were afraid to pull the trigger:

According to two sources with direct knowledge of the company’s decision-making, Facebook executives conducted a wide-ranging review of products and policies earlier this year, with the goal of eliminating any appearance of political bias. One source said high-ranking officials were briefed on a planned News Feed update that would have identified fake or hoax news stories, but disproportionately impacted right-wing news sites by downgrading or removing that content from people’s feeds. According to the source, the update was shelved and never released to the public. It’s unclear if the update had other deficiencies that caused it to be scrubbed.

“They absolutely have the tools to shut down fake news,” said the source, who asked to remain anonymous citing fear of retribution from the company. The source added, “there was a lot of fear about upsetting conservatives after Trending Topics,” and that “a lot of product decisions got caught up in that.”

This demonstrates the benefit of working the refs. Back in May, an ex-Facebook employee accused Facebook of manipulating its Trending Topics feed to favor liberal stories. Conservatives naturally went ballistic, and their shitstorm of abuse worked: Facebook caved in and agreed to change its process even though there was never any real evidence of liberal bias in the first place.

That was a victory, but not the real victory. The real victory is that it put the fear of God into Facebook, which became hypersensitive to anything that might affect right-wing sites—even if those sites were plainly bogus. And as Mike Caulfield points out, bogus right-wing stories like the Denver Guardian’s get a lot of attention on Facebook:

To put this in perspective, if you combined the top stories from the Boston Globe, Washington Post, Chicago Tribune, and LA Times, they still had only 5% the viewership of an article from a fake news site that intimated strongly that the Democratic Presidential candidate had had a husband and wife murdered then burned to cover up her crimes.

Facebook probably could have stopped this kind of thing, but their earlier run-in over the Trending Topics feed made them afraid to do anything. That’s how Facebook ended up promoting dozens of right-wing conspiracy theories during a presidential campaign. They had been worked.