Kathy Cramer, a political science professor at the University of Wisconsin–Madison, has spent the last decade criss-crossing Wisconsin talking to rural folks about politics. Today she tells us what they’re so mad about:

What I was hearing was this general sense of being on the short end of the stick. Rural people felt like they not getting their fair share.

….What I heard from my conversations is that, in these three elements of resentment — I’m not getting my fair share of power, stuff, or respect — there’s race and economics intertwined in each of those ideas.

When people are talking about those people in the city getting an “unfair share,” there’s certainly a racial component to that. But they’re also talking about people like me [a white, woman professor]. They’re asking questions like, how often do I teach, what am I doing driving around the state Wisconsin when I’m supposed to be working full-time in Madison, like, what kind of a job is that, right? It’s not just resentment toward people of color. It’s resentment toward elites, city people.

This is obviously a tough nut to crack because so much of it is due to demographic changes that simply aren’t going to slow down. Generally speaking, rural communities are overrepresented in legislatures, but nonetheless they’ve lost relative influence as urban area have gotten more populous. Likewise, they get more stuff than they should, but again, less than they used to thanks to dwindling relative numbers.

And then there’s respect. But what’s the answer? Rural beliefs that city sophisticates look down on them has been a feature of American life forever. Hell, it was a feature of life in the Roman Empire. Urban areas are more cosmopolitan, and city mice do tend to be 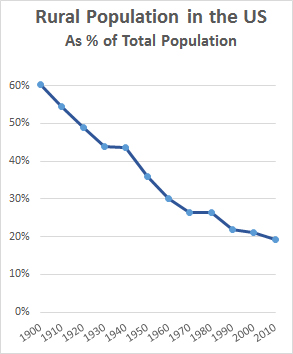 contemptuous of the old-fashioned mores of the country mice. This is not something that’s going to change.

It’s common to explain white resentment as a function of demographic change: whites used to be the vast majority of Americans, but they’re steadily losing that distinction. And that’s true. But it’s a tiny rivulet compared to the tsunami of de-ruralization. Take a look at the chart on the right. In 1900, rural communities made up 60 percent of the population. Today it’s 20 percent. Even if rural communities get more attention than their numbers deserve, they’re still a tiny minority these days. They simply don’t have much political power anymore.

Rural-urban tension has been woven into American history since its very beginning. Thomas Jefferson represented the yeoman farmers at the turn of the 19th century and William Jennings Bryant represented them at the turn of the 20th. But if “Eastern elites” held a stranglehold over rural interests even then, today it’s far worse. Eastern elites no longer really even care. Except when they come by courting their votes, they just ignore the country folks.

So, yeah: power, money, respect, and racial decline. It’s all part of the stew. And it’s hard to figure out any way to really make a dent in this.

UPDATE: For an earthier and much more fun version of this argument, check out David Wong here.