Longtime creep Roger Stone has been occupying himself lately by tweeting golden oldies about the “Clinton Body Count” and how Hillary had Vince Foster killed because he knew too much. Charming as always. But a couple of weeks ago he was busy tweeting this:

OMG indeed. You will be unsurprised to learn that the document in question wasn’t real. Sadly, it contained a telltale clue common to autocrats around the world. Can you spot it? 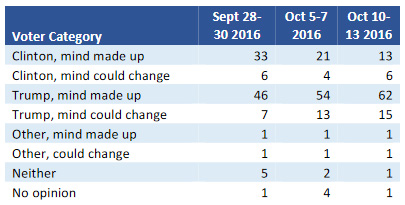 In the same way that megalomaniacs love to claim that they won re-election with 99 percent of the votes, this fake poll claims that Trump leads Clinton 77-19 percent. The pranksters might have fooled a few people if they’d stuck to something a little less obvious, but I suppose 77 percent must have seemed pretty modest to them. Perhaps this gives a clue about where it came from? Here is Reuters:

The FBI and U.S. intelligence agencies are examining faked documents aimed at discrediting the Hillary Clinton campaign as part of a broader investigation into what U.S. officials believe has been an attempt by Russia to disrupt the presidential election, people with knowledge of the matter said.

Russian officials deny any such effort.

In addition to the Carper letter, the FBI has also reviewed a seven-page electronic document that carries the logos of Democratic pollster Joel Benenson’s firm….The document, identified as a fake by the Clinton campaign, claims poll ratings had plunged for Clinton and called for “severe strategy changes for November” that could include “staged civil unrest” and “radiological attack” with dirty bombs to disrupt the vote.

Nice try, Russia, but you really need to up your game.