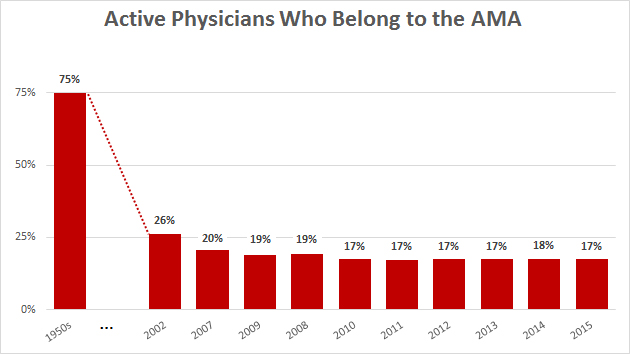 How do doctors feel about the nomination of Rep. Tom Price as Secretary of Health and Human Services? The New York Times weighs in:

When President-elect Donald J. Trump chose Representative Tom Price of Georgia to be his health and human services secretary, the American Medical Association swiftly endorsed the selection of one of its own, an orthopedic surgeon who has championed the role of physicians throughout his legislative career.

Then the larger world of doctors and nurses weighed in on the beliefs and record of Mr. Price, a suburban Atlanta Republican — and the split among caregivers, especially doctors, quickly grew sharp. “The A.M.A. does not speak for us,” says a petition signed by more than 5,000 doctors.

A faithful reader emails to ask: “I remember reading recently that a shockingly low number of doctors are members of the AMA. So what is it exactly?”

Membership numbers, it turns out, are not a secret, exactly, but neither does the AMA go out of its way to make them easy to find. Their current membership is about 235,000, but you have to adjust this number to remove students, retired doctors, and so forth. Based on publicly available data, and guesstimating that about one-fifth of its members aren’t practicing physicians, the chart above shows what the AMA’s membership looks like. They were indeed a powerhouse in the 50s, but not so much anymore:

Keep this in mind whenever you hear that “the AMA” endorses a political position—regardless of whether it’s one you approve of or not. They represent only about a sixth of all the physicians in the country. The rest may have very different opinions indeed.