Part two of our series of charts from the Economic Report of the President is all about higher education. First off, here’s the college premium over time: 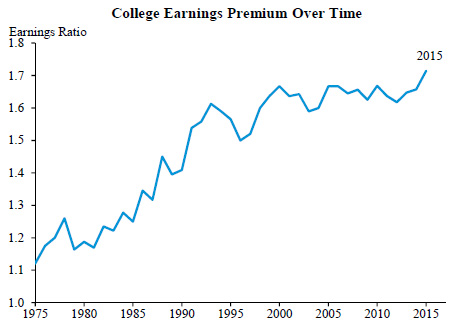 When I graduated from my local state university in 1981, I had no debt because attending public universities was practically free. On the other hand, my earning prospects were only about 20 percent higher than a non-college grad. Today, college grads often have tens of thousands of dollars in debt, but their earning prospects are 70 percent higher than non-college grads. So who got the better deal? That’s not entirely obvious.

Next up is a different measure of the value of a college education: 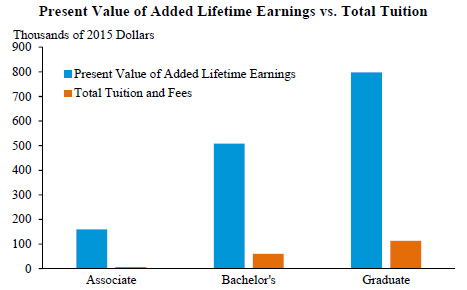 This helps answer the question, “How high can university costs go?” The answer is, “Pretty high.” Even with higher tuition, college is still a great deal. A bachelor’s degree, on average, pays off nearly 10:1. That means there’s a lot of room to raise tuition and still provide enough of a bargain that anyone who’s qualified will be willing to pay. Treating higher education this way may be a bad idea, but nevertheless, this chart suggests that states can continue to raise prices if they want to.

The first two charts have been all about nonprofit schools: community colleges, state universities, and private universities like Harvard and Morehouse. But for-profit institutions—which are typically trade schools—have exploded over the past three decades: 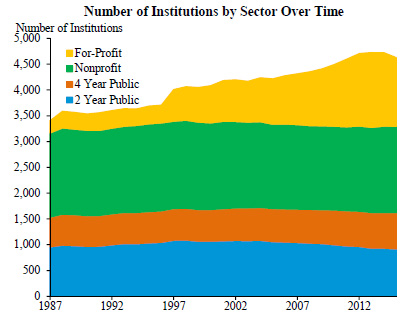 The number of trade schools has skyrocketed since 1987, from about 300 to well over a thousand. And that brings us to our final chart: 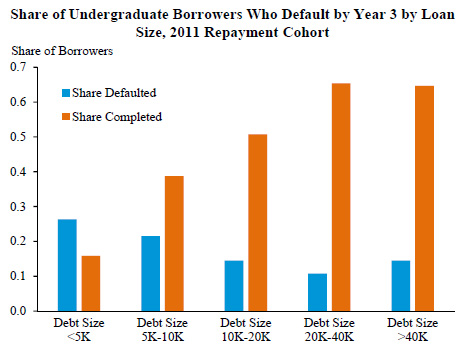 At first glance, this chart seems odd: the students with the smallest debt have the highest chance of defaulting. There are multiple things going on here, but the biggest one is that a lot of these students attended trade schools for a semester or a year and then dropped out. Their debts aren’t the biggest, but with not even a trade school certificate they can only get low-paying jobs that make it very hard to pay back their loans.

Too often, for-profit schools cajole people into signing up with promises that the government will pay for everything. Unfortunately, a lot of their students just aren’t suited for further schooling, so they drop out and end up with less than nothing: no certificate, and a big chunk of debt. The trade schools themselves don’t care much, since they get paid whether anyone graduates or not, but it’s a helluva bad deal for the students who end up broke. This is why President Obama’s recent crackdown on the worst offenders among for-profit trade schools is so welcome.