Readers who are extremely long in the tooth will remember a blogger named Steven Den Beste from back in the day. He was a gung-ho warblogger who wrote very long, very nerdy pieces about the urgent need to invade Iraq (with occasional forays into cell phone standards), so one day Daniel Davies decided that what we all needed was Shorter Steven Den Beste. Davies’ version was usually a withering sentence or two.

Today, things have changed. I can think of all too many folks who could stand to cut their word count in half, but for now I’d settle for Shorter Glenn Greenwald. Yesterday he wrote this:

According to Microsoft Word, the article clocks in at 2,645 words, so here’s the nickel version. A few days ago Julian Assange gave an interview to Italian reporter Stefania Maurizi. (It is illustrated with the photo on the right, which I hope they don’t 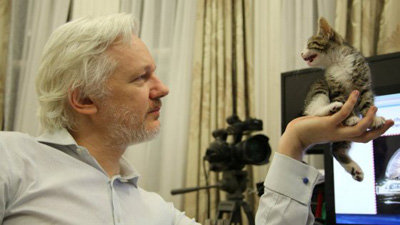 mind me re-using since it makes me like Assange a little better than I usually do.) Here are the relevant sections:

Most of WikiLeaks’ biggest revelations concern the US military-industrial complex….Why aren’t human rights abuses producing the same effects in regimes like China or Russia, and what can be done to democratise information in those countries?

In Russia, there are many vibrant publications, online blogs, and Kremlin critics such as [Alexey] Navalny are part of that spectrum…..In Russia there are competitors to WikiLeaks, and no WikiLeaks staff speak Russian….WikiLeaks is a predominantly English-speaking organisation with a website predominantly in English. We have published more than 800,000 documents about or referencing Russia and president Putin, so we do have quite a bit of coverage, but the majority of our publications come from Western sources….The real determinant is how distant that culture is from English.

….What about Donald Trump?…What do you think he means?

Hillary Clinton’s election would have been a consolidation of power in the existing ruling class of the United States. Donald Trump is not a DC insider, he is part of the wealthy ruling elite of the United States, and he is gathering around him a spectrum of other rich people and several idiosyncratic personalities. They do not by themselves form an existing structure, so it is a weak structure which is displacing and destabilising the pre-existing central power network within DC. It is a new patronage structure which will evolve rapidly, but at the moment its looseness means there are opportunities for change in the United States: change for the worse and change for the better.

The Guardian’s piece, written by Ben Jacobs, made several claims: (1) Assange “long had a close relationship with the Putin regime,” (2) Assange said there was no need for WikiLeaks to undertake a whistleblowing role in Russia “because of the open and competitive debate he claimed exists there,” and (3) Assange gave “guarded praise” of Trump.

The first is unfounded, and the Guardian has now retracted it. The second is false as well. Whether you choose to believe him or not, what Assange said is that WikiLeaks isn’t a local player in Russia and mostly appeals to English-speaking leakers. The third is hazier. Personally, I’d say Assange is wildly naive about Trump not representing an “existing power structure,” and disingenuous in calling part of Trump’s inner circle “idiosyncratic personalities.” That said, “not a DC insider” plus “destabilising the pre-existing central power network within DC” plus “change for the worse and change for the better” could reasonably be described as “guarded praise.” Those are all things that Assange pretty clearly views favorably.

This is a lot more than two sentences, but I’m not as witty as Dan Davies. In any case, I agree with Greenwald about two out of three of these things, and hopefully corrections will go as viral as the initial article. That’s how things usually work in social media, right?