In 2013, the Congressional Budget Office estimated that the latest version of Ryan’s premium-support idea would generate savings for both the government and Medicare beneficiaries without reducing benefit levels. So no, it doesn’t “definitely” qualify as a cut in benefits, serious or otherwise.

Ponnuru is right about this. Ryan’s original plan included stiff caps on spending and a conservative benchmarking plan. He later got rid of those and added a public option, and the CBO did in fact estimate that a plan like this would save money without benefit cuts. It wouldn’t save very much money—about 2 percent of total Medicare spending in 2020—but it was still a savings. Nonetheless, there 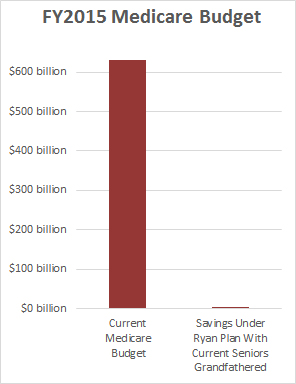 are a few things to keep in mind in case you haven’t read all the fine print in the CBO report:

In theory, price competition should produce savings. That was the assumption of Obamacare, and for some people that turned out to be true. For others, not so much. Overall, it doesn’t seem to have produced anything extraordinary.

The same would almost certainly be true of Ryan’s plan. Its savings are minuscule, and are balanced on a knife-edge of multiple CBO assumptions. But this raises a key question: if all this is true, why bother? What’s the point of putting an entirely new system in place that’s likely to produce nearly identical costs and benefits compared to the current one?

This is what to keep in mind. The answer, most likely, is that Ryan’s plan is a Trojan horse. He’ll try to get it passed in a form that doesn’t have much effect—and therefore not a lot of opposition—but he thinks that a premium support program is easier to cut back than the current system. In a few years, that’s what he’ll start doing. He’s apparently playing a very long game here.

There might be other reasons, of course. But this is still the key question: why is Ryan so invested in passing a plan that would supposedly have virtually no effect on costs or services? Cui bono?

POSTSCRIPT: In the Trojan horse category, I forgot to mention things that might be quietly included in the Ryan legislation from the start. After all, his plan is just an outline, and plenty of other Republicans will have a chance to add their own pet ideas.

Take Tom Price, for example, soon to be our new Secretary of Health and Human Services. He’s a fan of “balance billing” for Medicare. Never heard of it? That’s pretty much what Price and his friends at the AMA are counting on. Ryan Cooper explains here.