Bill O’Reilly is suddenly a big defender of the Electoral College: 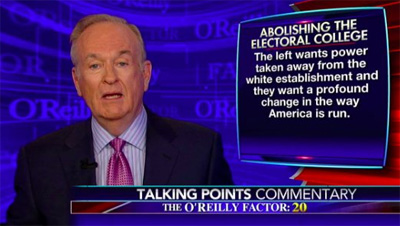 scrapped. But there’s a hidden reason for this.

….Talking Points believes this is all about race. The left sees white privilege in America as an oppressive force that must be done away with. Therefore white working class voters must be marginalized and what better way to do that than center the voting power in the cities….White men have largely abandoned the Democrats, and the left believes it’s because of racism that they want to punish minorities, keep them down. So that’s what’s really going on when you hear about the Electoral College and how unfair it allegedly is.

It’s a funny thing. Conservatives tell us endlessly that the best way to build a colorblind society is to be colorblind. No more special favors, no more affirmative action, no more quotas. But whenever someone suggests a change that happens to disadvantage white people even slightly, suddenly they see color everywhere.

Of course, O’Reilly is right that race is relevant to the Electoral College. The American presidential voting system was designed by the framers both to give more influence to smaller states and to give more influence to states with lots of slaves. It was pretty explicitly racist. Defending it on the grounds of its benevolence toward the “white establishment” seems like it ought to be a bridge too far even for the likes of O’Reilly.

In any case, Democrats have now lost two presidential contests in the 21st century in which they won the popular vote. You really don’t have to look much further to understand why liberals are a little gun-shy of the Electoral College these days.