This hardly seems important at the moment, but Sarah Kliff mentioned something today that’s always bugged me. She’s explaining why prescription drugs cost a lot more in the US than elsewhere, and concludes that it’s because other countries all negotiate drug prices at a national level and we don’t:

The United States has no government panel that negotiates drug prices. There are thousands of health insurance plans all across the country. Each has to negotiate its own prices with drugmakers separately. Because Americans are fragmented across all these different health insurers, plans have much less bargaining power to demand lower prices. In other words: Australia is buying drugs in bulk, like you would at Costco, while we’re 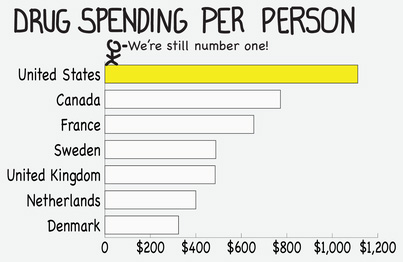 picking up tiny bottles at the local pharmacy. You can guess who is paying more.

OK, but take a look at the stick figure on the right, part of Vox’s latest innovation in explanatory journalism. The country with the lowest drug spending is Denmark, population 6 million. Compare that to Blue Cross, which insures about 100 million people. United Healthcare insures about 70 million. Aetna insures about 20 million. Kaiser Permanente clocks in around 10 million.

In other words, all of these health insurers are as big as whole countries. And they’re way bigger than little Denmark. So why are they unable to negotiate lower drug prices? Medicare may be prohibited from doing this, but private insurers aren’t.

Are insurers hemmed in by rules requiring them to offer any “medically necessary” drug? Are they, ironically, limited by competition—afraid of losing customers if they don’t cover everything? Are they just lousy negotiators because they don’t really care? After all, high prices are going to get passed along anyway, so it doesn’t hurt them as long as their competitors are in the same boat.

Alternatively, do I completely misunderstand how the process works?

My gripe with this is not so much that drug prices are high. My gripe is that the US essentially subsidizes the rest of the world. Pharmaceutical companies require a certain overall return on their invested capital, but they don’t care where it comes from. If prices are low in Europe and high in the US, that’s fine. If prices in the US came down, they’d make up for it by raising prices in Europe—and that would be fine too.

So why not put America First, to coin a phrase, and push down prices here? It wouldn’t hurt the drug companies, it would just force them to raise prices elsewhere. That would be fine with me. I’ve never really understood why we’re in the business of helping Europe pay less for drugs.