Tom Philpott passes along a bit of news about Donald Trump that flew under the radar yesterday:

Amid the furor surrounding allegations of covert ties with Russian intelligence figures as well as his first press conference since winning the election, President-elect Donald Trump found time in his hectic Wednesday schedule to meet with two towering figures in the agriculture world, reports Fox Business Daily….The meeting involved German chemical giant Bayer’s $66 billion buyout of US seed/agrichemical giant Monsanto—a deal that will have to pass antitrust muster with Trump’s Department of Justice.

….Fox reports that Bayer CEO Werner Baumann and his Monsanto counterpart Hugh Grant met with the incoming president at Trump Tower in midtown Manhattan to promote the merger. In an email to the news organization, a Monsanto spokesperson confirmed that the two execs “had a productive meeting with President-Elect Trump and his team to share their views on the future of the agriculture industry and its need for innovation.”

Is this…appropriate? I know that’s sort of a silly question when it comes to Donald Trump, but is the president supposed to meet with people who have business pending with the Department of Justice? This is an antitrust review, not a criminal case, but it still seems wrong.

Am I off base? Does this kind of thing happen all the time?

UPDATE: And there’s this, which I missed earlier: 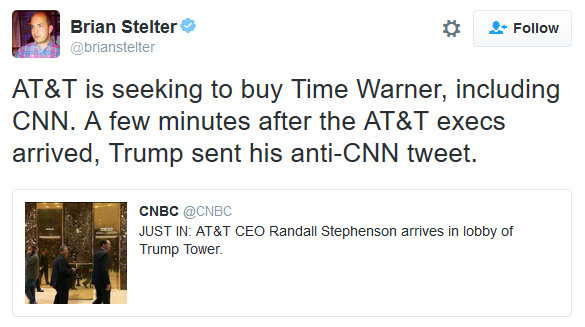 Gee, I wonder what they talked about? Is Trump planning to become the single point of approval for all merger and antitrust matters?