There’s a lot of Beltway chatter these days about block-granting Medicaid, a longtime Republican dream. In theory, block granting is simple: instead of covering a certain percentage of each state’s Medicaid spending, states are all given a simple grant of money for Medicaid, which they can spend as they choose. They can add to it, they can redistribute it, they can create innovative programs, or do anything else they want. There are usually a few restrictions on where the money can go, but not too many.

Why are Republicans so gung-ho on block grants? The official answer is that they don’t think Washington should be telling states how to spend their money. Instead, they want to let a thousand flowers bloom as our laboratories of democracy experiment with new and innovative ways of delivering health care more efficiently.

You will, of course, be unsurprised to learn that this isn’t the real reason. The real reason is that, in practice, block grants will steadily reduce spending on Medicaid. There are two reasons for this, and both are simple. Currently, Medicaid reimburses doctors and hospitals for care at set rates. As health care costs rise, Medicaid spending automatically keeps up. Block grants, however, are usually set to increase at a specific rate, which is usually the overall inflation rate. This means that the block grants grow far more slowly than actual health care costs:

This chart shows what’s happened over the past 16 years. If the same thing happens over the next 16, Medicaid spending would need to increase about 80 percent in order to provide the same level of services. Under a block grant keyed to overall inflation, however, it would increase only about 40 percent. In real terms, this means that projected Medicaid spending would be slashed by nearly a quarter. That’s a nice, big chunk of money that can be put toward tax cuts for the rich.

The second reason that block grants reduce spending is even simpler. Under the current system, you qualify for Medicaid if you meet certain conditions. Income is part of it, and during recessions this means that Medicaid spending automatically goes up as more people qualify. With a block grant, this doesn’t happen. It is what it is, regardless of how many people are in need. And since states are usually strapped during recessions and barred from deficit spending, this means that Medicaid spending stays constant or even goes down at the worst possible time.

Now, this doesn’t have to happen. Block grants for Medicaid could be keyed to medical inflation, and the size of the grants could be keyed to a formula that accounts for the number of people who qualify for it. If Republicans did that, it would demonstrate good faith. It would show that instead of merely trying to free up money for tax cuts, they’re truly interested in letting states experiment to see if they can provide better care with the same funding.

I guess we’ll have to wait and see, but I wouldn’t bet the ranch on seeing anything like that from Donald Trump and Paul Ryan. They just want to slash spending on the poor.

And that leads us to one final thing: who gets all this Medicaid money, anyway? The undeserving poor? Here’s a breakdown from a very useful short Medicaid primer by CBPP: 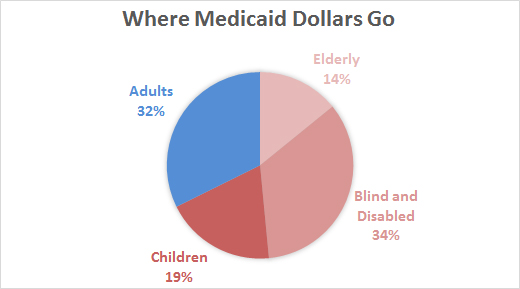 Only about a third of Medicaid spending goes to poor adults. The vast majority goes to nursing care for the elderly; medical care for the blind and disabled; and medical care for children. Do you really want to see steadily reduced spending on grandma’s nursing home—which will inevitably make long-term care even crappier than it is now? Do you really want to cut off the blind and disabled? Poor children? Even if you don’t think that poor adults deserve decent medical care, are you really hellbent on taking it out on the elderly, the disabled, and poor kids?

We’re going to find out.