Here’s a headline currently running in the New York Times: 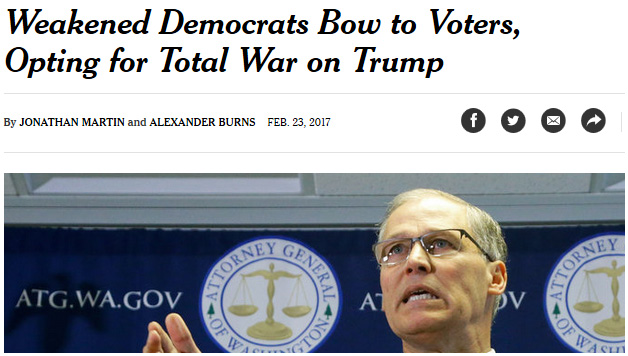 I don’t have any beef with this. The Democratic base is demanding total war on Trump, and Democratic politicians have mostly gotten on board. What I do wonder, though, is whether the Times ever used language like this during the first couple of months of the Obama administration? Maybe they did, but via Google, here’s a walk down memory lane as reported by the Times in early 2009: 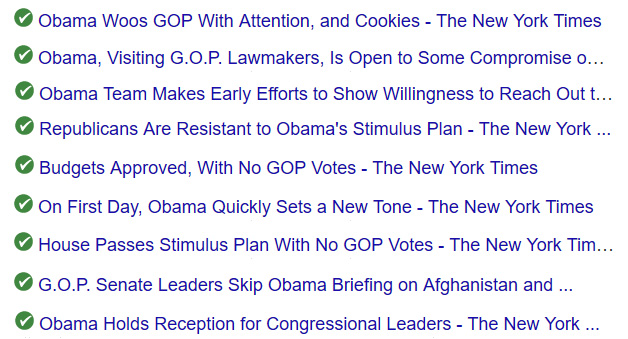 Obama woos and visits and holds receptions and reaches out and sets a new tone. Republicans are “resistant,” they skip briefings, they vote unanimously against budgets, and unanimously against the stimulus bill. But there’s no war in those headlines.

Later, of course, we learned that there was a war. Before Obama was even inaugurated, Republicans met and agreed to form a united front that unanimously blocked every Obama initiative, sight unseen. The fact that the country was mired in the most serious economic downturn since the Great Depression didn’t matter. Their only goal was to prevent Obama from having any legislative successes.

The smoking guns that uncovered this strategy didn’t come until later, but anyone reporting from Capitol Hill surely knew what was happening almost immediately. Republicans publicly spurned Obama’s attempts to compromise. They voted against the stimulus bill unanimously in the House and nearly unanimously in the Senate. They launched the era of the routine filibuster on everything. They embraced the tea party within a month of Obama taking office.

In other words, it was all pretty obvious. And yet, coverage at the time tended to refer vaguely to a “breakdown in bipartisanship.” Perhaps Democrats were pushing too hard? Maybe they were unwilling to compromise? Surely Republicans were sincere about their opposition to increasing the deficit?

So why the difference this time? Democratic activists have been pretty vocal about what they want, but then again, by this time in 2009 the tea party had already gotten its start. They were pretty vocal too.

My guess: as always, Republicans are given a pass for their ultra-conservative views, which might be a little crazy, but are still presumed to be deeply rooted and genuine. Democrats, conversely, are generally thought craven if they “give in” to their base. Democrats tend to be a bit wonkier and more policy driven than Republicans, and as a result reporters generally don’t believe that they’re truly passionate about their principles. The very fact that they’re more willing to compromise proves this. So when they oppose Trump, they’ve “conceded” to their base; they’re “mimicking” the Republican strategy; they’re “quietly worried” that their base expects too much; they “still hope for compromise”; and “protesters are leading the politicians.” In other words, it’s pretty calculated, not at all like those Republicans with their deeply ingrained family values and distrust of government.

Blecch. Can you tell I’m annoyed?