Donald Trump at his pep rally yesterday on immigration:

Nothing happened in Sweden last night, which has prompted lots of IKEA and ABBA joke memes. However, Zack Beauchamp thinks Trump was probably referring not to something that happened recently, but to the alleged “rape epidemic” in Sweden ever since they started taking in lots of Middle Eastern immigrants. This is apparently a staple of the Breitbart-o-sphere. Unfortunately, Beauchamp then says this:

The problem, though, is that this “rape epidemic” is as fake as the Bowling Green Massacre.

Canadian reporter Doug Saunders rigorously investigated the narrative, and concluded that it “falls apart as soon as you speak to anyone knowledgeable in Sweden.” Official Swedish statistics do indeed show a high rate of rape, but that’s because Swedish law has an extremely expansive definition of what qualifies as rape under the law.

….These panics about immigration, instead, reflect a long history of sexual panics in the West about non-white immigrants. Etc.

Whenever I see writing that carefully avoids providing comparative statistics, my BS detector goes off. Sure enough, Saunders didn’t “rigorously” do anything. He linked to an old report that tallies crime rates for the years 1997-2001—which is all but useless in 20171—and then glided quickly past his eventual acknowledgment that the foreign-born have “a higher rate of criminal charges than the native-born.” If you’re interested, here’s the actual data from the report (tables 3 and 6 in the appendix): 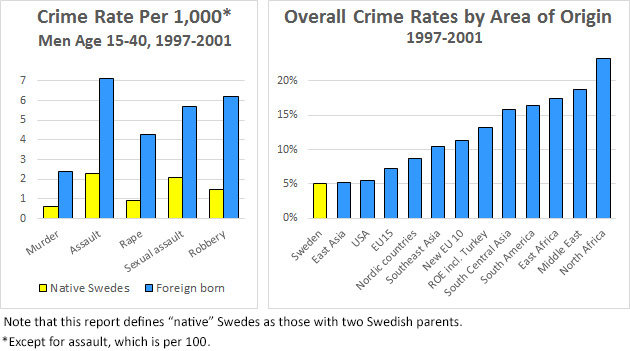 These are very big differences. Now, Saunders also links to a study which suggests that “half to three-quarters” of the difference can be accounted for by socioeconomic status. Maybe so. But crime is crime. If you’re the victim of assault from a Syrian refugee, you don’t really care if it happened because he’s Syrian or because he’s poorer than average.

There’s plenty more to legitimately say about this. If poverty really is a causal factor, maybe it means Sweden needs to be more generous. Other statistics suggest that the children of the foreign-born have much lower crime rates than their parents. And as Beauchamp says, “rape” in Sweden is defined pretty broadly.

UPDATE: I don’t know just how interested everyone is in the minutiae of Swedish crime, but here’s the crime rate over the past decade: 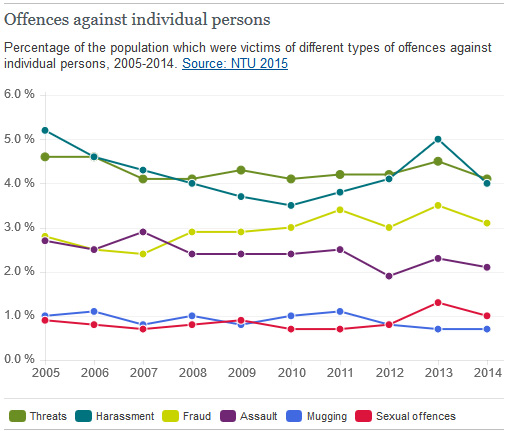 Some are up, some are down, but the overall trend appears fairly flat despite the large rise in immigrants over this period. On the other hand, preliminary figures show that crime against persons was up 7 percent in 2016, including a 13 percent increase in reported rapes and a 14 percent increase in child abuse.

1Apparently this is the most recent report that examines crime rates by area of origin. I don’t know why Sweden hasn’t done anything more recent.